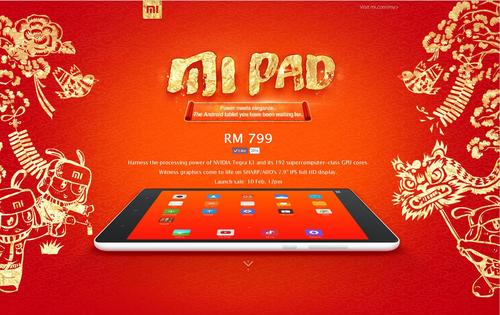 Remember Xiaomi Malaysia's Mi Pad teaser that we reported on a day ago? Well, Xiaomi Malaysia has been kind enough to not keep us in suspense any longer, and today announced that the Mi Pad will indeed be on sale through their website on 12pm next Tuesday, 10th of February.

Unfortunately, only the white 16GB variant of the Mi Pad will be offered, but that's not the most surprising news from them. The Mi Pad will cost RM799. No, you're not reading that wrong, and neither did Xiaomi misplace a number '1' anywhere in that number.

Xiaomi has always managed to undercut its competitors (we're looking at you, Apple) by a huge margin, and it looks like they have done it again. To put things into perspective, the price of the base 16GB Wi-Fi variant of Apple's iPad Mini 3 starts at RM1,279, which then increases depending on storage capacity and connectivity.

The Mi Pad may comes with a small price, but it definitely does not come with inferior hardware or features. It sports a 1080p IPS full HD display, NVIDIA's Tegra K1 chipset,  NVIDIA's desktop-class Tegra K1 processor, 2GB of RAM, 16GB of internal storage (expendable to 128GB via MicroSD), a 6700mAh lithium-ion polymer battery, an 8-megapixel rear camera, and a 5-megapixel front facing camera.

With such promising credentials offered at such an alluring price point, it looks like the Mi Pad is poised to sell out really fast once it hits the market, much like its smartphone brethren.