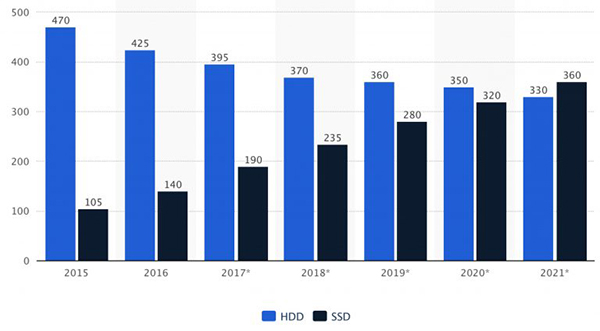 According to estimates by online statistics firm Statista, worldwide shipments of hard drives are expected to decline for a third consecutive year. Based on numbers from Statista, about 425 million hard drives were shipped in 2016. This year, that number is expected to fall by about seven percent to 395 million.

That's still significantly more than SSDs, but note how fast shipments of SSDs are rising. From 2015 to 2016, shipments of SSDs increased by over 33 percent. SSD shipments are expected to reach 190 million units in 2017 – that's an increase of about 35 percent.

In fact, Statista predicts that shipments of SSDs will surpass HDDs by 2021, as flash memory manufacturers continue to ramp up production and bring costs down.

This also explains why many players in the industry (particularly WD) were eager to snap up Toshiba's flash memory business when it was put up for sale.