Twitter now lets you add stickers to your photos (updated)

Twitter now lets you add stickers to your photos (updated) 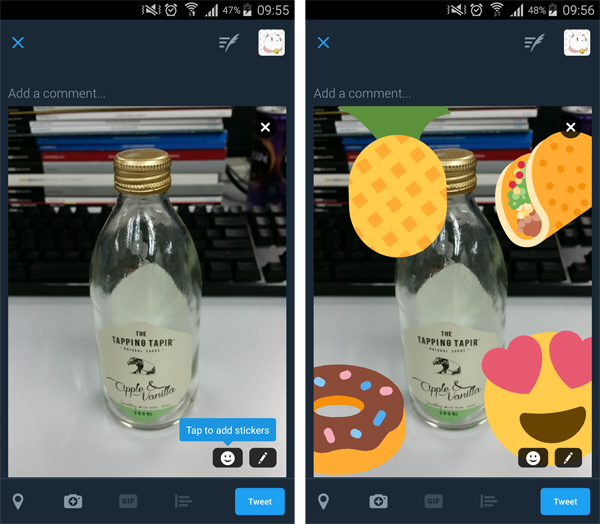 Updated on July 29, 2016, 09:55 am: Twitter has announced in a tweet (obviously) that its stickers are now available to everyone!

Coming soon! Unleash your creativity by adding fun #Stickers to your photos on Twitter: https://t.co/Ph92Oivyhy pic.twitter.com/NZoM6nHenD

Let’s face it, we all love our stickers. Need some proof? Just take a look at the Japanese social messaging app, LINE, who makes a cool US$270 million (~RM1.1 billion) a year just from selling stickers.

Twitter is the next social media platform to adopt these wonderful little stickers, and they should be available to all users worldwide within a couple of weeks. But the strange thing is, you will only be able to sprinkle them onto the photos you upload using your iOS or Android device – you can’t embed them into your tweets or direct messages, nor will you be able to add them onto photos you upload using your desktop PC.

Connect your photos to the world with a visual spin on hashtags: tap #Stickers to peel back a fun new way to search. pic.twitter.com/YVy7r53Nja

The distinguishing factor of Twitter’s stickers is that they will be made searchable after you upload them.

Let’s say you’re uploading a photo of yourself at the beach, complete with a sticker of the sun on the top right hand corner of the image, as an example. Once your photo is uploaded, you’ll be able to tap on the sticker, and be brought to a separate timeline consisting of images from around the world with that particular sun sticker.

Previous Story
Another Pokémon GO player drove and crashed his vehicle, this time into a school
Next Story
Rumor: Next iPhone pre-orders to start on September 9