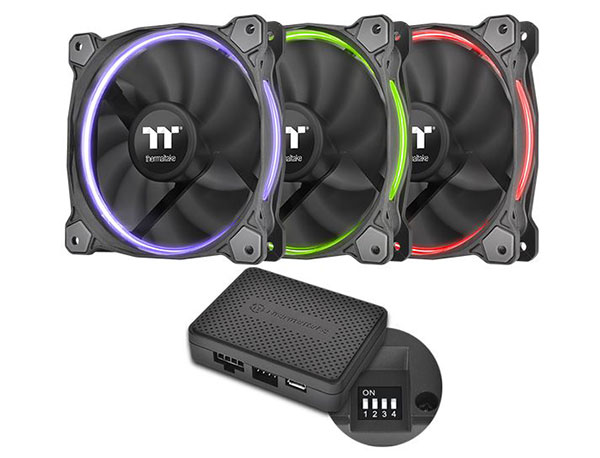 Thermaltake has launched the Riing LED RGB Radiator Fan TT Premium Edition, its first digital radiator fans that can be fully controlled via software. The new radiator fans first debuted at COMPUTEX 2016, and Thermaltake is now making them available for purchase.

The fans are connected to a proprietary digital fan hub, and work in conjunction with software to let you change the fan speeds, LED colors, or even create custom fan profiles. The digital fan hub is necessary for the fans to work, and a standard 4-pin PWM fan header is not compatible (although the fans support the PWM function). But to prevent you from making the wrong connection, Thermaltake has gone with proprietary 5-pin connectors that only fit on the hub.

The Riing LED RGB radiator fans are ringed by 256-color LEDs, and these can be set to display either a static color or RGB color cycle. Thermaltake says the RGB lighting is visible from all directions, so it looks like they’ll appear equally scintillating even when installed horizontally.

Each fan hub supports up to three fans, but the Riing RGB Software actually supports up to an impressive 48 fans, and you can reach this number by daisy chaining multiple fan hubs together. You can also assign each fan a number using the onboard DIP switch in order to make it easier to identify and control individual fans. 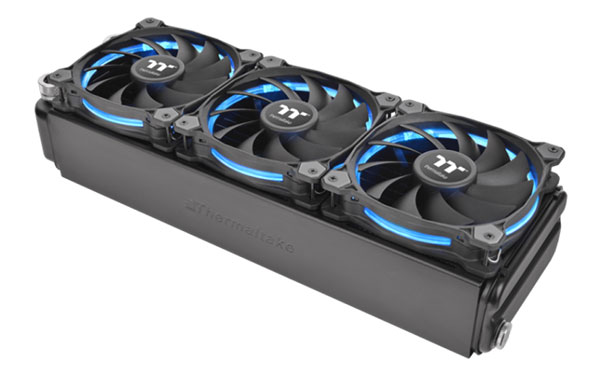 The 120mm fans themselves utilize hydraulic bearings and an 11-blade design, complete with rubber-padded mounts to reduce vibration. They also feature a so-called wind blocker frame that Thermaltake says helps direct airflow toward the middle section of the blades and blocks air from escaping, which supposedly further cuts down on unwanted vibrations and noise.

The new radiator fans come in packages of three and ship with the digital fan hub. They are available now on Thermaltake’s website for US$89.99.