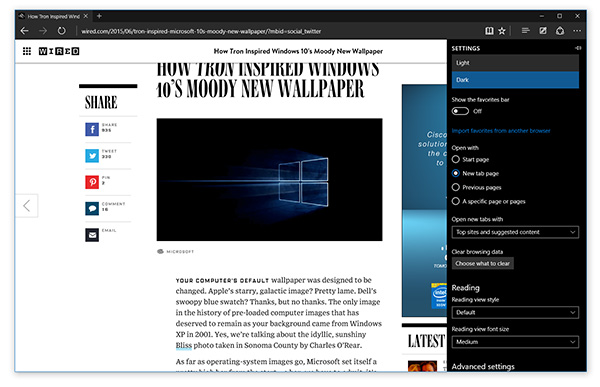 As we approach July 29, it comes as no surprise that recent Windows 10 Insider preview builds are getting more and more polished. If you’re in the Fast ring, the latest Build 10158 is “full of improvements to stability and quality as well as some additional UI polish”.

But that’s not say there are no new features. In fact, many of them are related to the new Microsoft Edge browser. For one, this build now sports the Edge branding. Similar to what we’ve in the latest build for phones, the new app ID means that any favorites, cookies, history, and Reading list items that you’ve saved in the Project Spartan app in older builds would be lost - so make sure to backup your favorites before upgrading. Other new features in Edge include new customizations for the New Tab page, password and form-filling support, and a dark theme.

In terms of UX improvements and bug fixes, there are several for Continuum, a feature that ensures a smooth transition when you move from Desktop to Tablet mode, and vice versa. And now, when using the Start Menu, you can swipe up on the left side to open All apps.

Other features in Build 10158 include an updated Photos app, and new delay options (up to 5 seconds) in the Snipping Tool. Cortana is also gaining a few updates, including integration with Office 365. You can test out this initial integration if your company is opted into First Release for Office 365. Lastly, the build also contain fixes specifically for Surface 3 and Surface Pro 3.

Previous Story
You can get Cortana's help in Microsoft's Office 365 as well
Next Story
Magic Duels: Origins to bring back the king of TCG to the digital plains