Is there a ninth planet in the Solar System after all? (Sorry, Pluto)

Is there a ninth planet in the Solar System after all? (Sorry, Pluto) 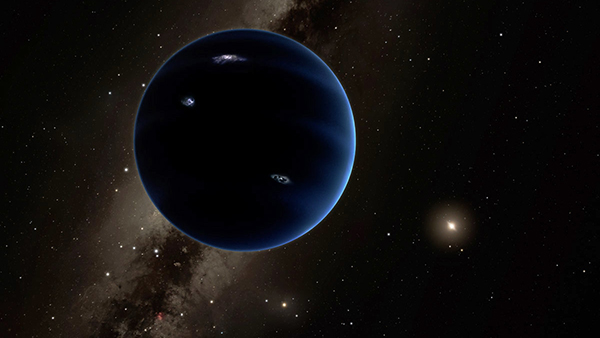 For those of us who grew up learning that there were nine planets in our Solar System, Pluto’s demotion to a dwarf planet caused more than a little discomfort (there will always be nine planets!). But as the stars would have it, two Caltech astronomers have now picked up on compelling signs that there might be a ninth planet that exists beyond Pluto, and it’s a big one at that.

Dubbed Planet X for now, the scientists theorize that it is akin to a mini-Neptune, or about 10 times the size of Earth. Why hasn’t anyone noticed it until now? Apparently that’s because it orbits far out from the Sun on a highly elliptical path – so far that it takes 10,000 to 20,000 years to complete a full revolution. If Planet X really exists, it would be somewhere between 200 and 1,200 times the Earth’s distance from the Sun. The theorized size of the planet would also mean that it would have been too small to be detected by previous surveys of the Solar System, like NASA's Widefield Infrared Survey Explorer (WISE).

In a paper published in The Astronomical Journal, the scientists noted the peculiar movements of half a dozen small bodies in the Kuiper belt – a belt of comets, asteroids and other icy bodies that lies beyond Neptune. The orbits of all six reportedly loop outward in the same quadrant of the Solar System and exhibit similar tilt angles, as if they were being pushed into those trajectories by the gravity of a larger body and in stark contrast with the rest of the Kuiper belt. 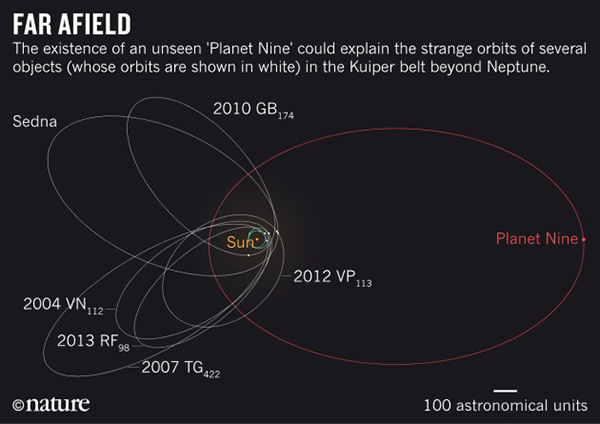 The odds of all six having such similar orbits by chance are rather slim – about 1 in 14,000 – which appears to work in favor of arguing for the presence of the giant planet. This isn’t the first time that someone has claimed evidence of a planet lurking beyond Neptune. In 1905, Percival Lowell predicted just such a planet, and his calculations actually led to the discovery of Pluto, which was far too small to be what Lowell thought was out there.

Fortunately, astronomers are about to get a better chance at spotting Planet X, if it exists. The Large Synoptic Survey Telescope will soon search the entire Southern Hemisphere sky soon, and the telescope should be able to find more Kuiper belt objects that have been knocked out of their usual orbit by the planet. As of now, the small sample size of six makes it difficult to attribute too much statistical significance to it, so the observation of further Kuiper belt objects may prove crucial.

There’s even the possibility that the telescope could spot planets that are just twice the size of Earth, up to distances several hundred times Earth’s distance from the Sun.

Still, this is all conjecture, and until someone actually observes the elusive Planet X, there are just a lonely eight planets in our Solar System.

Source: The Astronomical Journal via The New York Times.