Take a tour of Star Trek's USS Enterprise-D in VR

Take a tour of Star Trek's USS Enterprise-D in VR 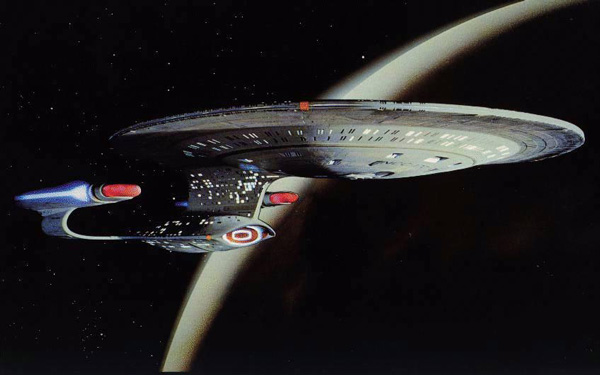 It's a tough time to be a Star Trek fan. While the new movies didn't invalidate the older universe, it did change the tone for the series radically. No longer was Star Trek a series about science, discovery and mankind's exploration of space. Instead it turned into an action series filled with dramatic battles (to be fair, the Next Generation movies were action packed too) and copious amounts of lens flare.

While we'll probably never see Patrick Stewart as Captain Picard again, at the very least we'll get to revisit the iconic NCC 1701-D.

If nothing else, virtual tours like these will be one of the best uses for VR. While virtual tours of real-life locations are already available, we have a feeling that there'd be a ton of demand for tours of famous fictional locations.

We admit, when Alien Isolation had a near perfect recreation of the Nostromo from Alien as DLC, we spent more time walking around the recreated locations from the movie than playing the game itself. We suspect that there's definitely a demand for these kinds of experiences, especially if they're famous places like the Enterprise-D or the Millennium Falcon.

It's impressive that the creator of the Enterprise-D tour, Jason, plans to eventually make the whole ship open for exploration, with every room on every deck (no word yet on the Jeffries tubes) accessible, as well as an external tour of the ship via the Enterprise's shuttles. Right now though, he's already finished work on the main shuttle/cargo bay, as well as most of the first two decks. This means that most of the iconic locations from the show such as the bridge, the captain's ready room and even Ten Forward are already completed. Sadly, as nostalgic as the tour is, the omission of Majel Barrett-Roddenberry's voice as the computer is sorely missed.

Done completely in Unreal Engine 4, the project (if completed) will be compatible with the Oculus Rift, though it's up in the air right now whether that'll come to pass.

Jason reveals that he's thinking of getting a license from CBS so that he can continue working on the tour without any legal issues. Kickstarter pledges are also being looked into, although that pretty much depends on whether CBS gives him the green light to proceed. CBS's legal team probably wouldn't be too happy with unauthorized use of their property, especially if it's for commercial use.

You can learn more about the project at its website.