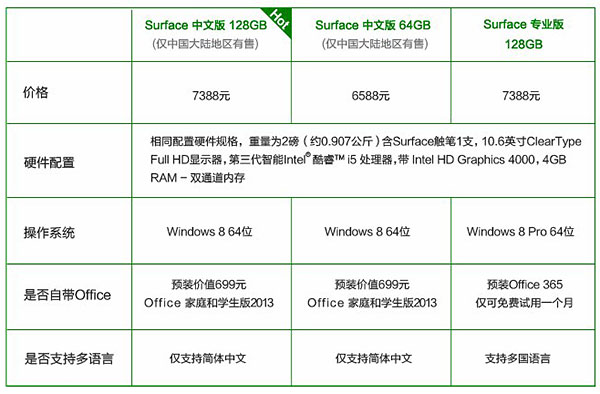 After announcing that the Surface RT and Surface Pro would be available in more countries last month, Microsoft has yesterday started selling the Surface Pro in China (the country has gotten the Surface RT since late October last year). Interestingly, as noted by Windows Phone Central, in addition to the 128GB version Surface Pro, Microsoft has introduced two new variants of the higher-end tablet just for the Chinese market, which can be seen on the company’s online store at Tmall.com. Besides the storage capacity difference (64 vs. 128GB), this new ‘Surface Chinese’ only supports the Chinese language, runs Windows 8 (the core version) instead of Windows 8 Pro, and comes pre-installed with a full version of Microsoft Office Home and Student 2013 (the regular Surface Pro comes with a one-month trial of Office 365 Home Premium).

It’s unlikely that we’ll see such Surface Pro variants when the tablet finally lands in Singapore, but for users who don’t need the advanced features in Windows 8 Pro (such as encryption, virtualization, PC management, and domain connectivity features), being able to exchange that for a perpetually-licensed edition of Office 2013 does sound very appealing.