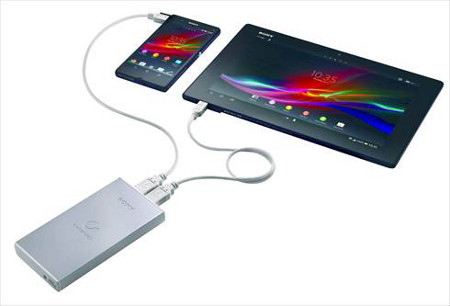 Sony has introduced a new high-capacity portable charger, the CP-F10L. This new charger packs an impressive 10,000mAh charge in a slim and lightweight aluminum body. The charger has an output of 3.6A and dual USB output ports so two devices can be charged simultaneously. Users can also check how much power is left in the charger via the convenient LED indicator. Another useful feature of the charger is that it is also able to preserve 90 per cent of its battery capacity even after being charged 1,000 times.

The portable charger weighs 260g and is only 16.5mm thick thanks to its use of a Sony Lithium-ion Polymer battery. The new CP-F10L USB Portable Charger from Sony will be available in selected countries in the Asia-Pacific from June 2013 onwards.

All images accredited to Sony