Sony is really heating up the competition in the digital imaging space. Just months after announcing the QX10 and QX100, the Japanese giant is now set to launch two new full-frame cameras that are fitted into a compact form factor body. We were invited just hours ago to have a hands-on session with the new A7 and the A7R.

The A7R is the world's lightest interchangeable lens full-frame camera. We can attest to this because this camera weighs a mere 407g, without any lenses or accessories attached. Of course, just because it's light and compact, that doesn't mean that it loses out in performance. The sensor on the A7R is capable of shooting 36.4MP and 14-bit RAW. Combined with a newly developed BIONZ X image processor, the images from this camera has incredibly high detail, with minimal noise even at high ISO levels.

To ensure maximum functionality, Sony has also included Wi-Fi and NFC functionality inside this camera. Other features include a 3-inch tiltable LCD and a new OLED viewfinder, named XGA OLED Tru-Finder. 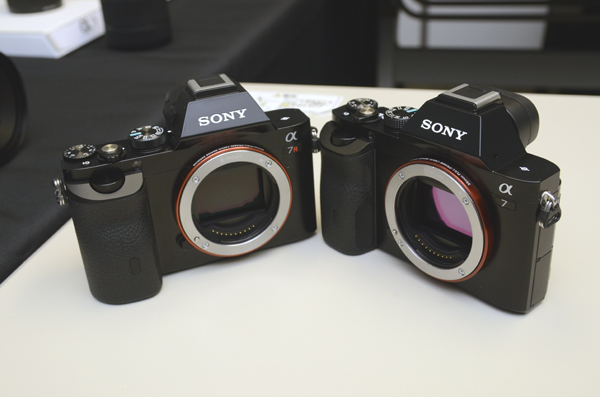 As for the A7, this camera is practically the same camera as the A7R, except for a lower megapixel count (24.3MP to be exact), an AF system that has both contrast and phase detection and a slightly heavier body.

Both cameras will accept any existing E-mount lenses (non full-camera lenses will have a crop factor  when paired with the A7 and A7R). To use any A-mount lenses, an optional adapter will have to be purchased. Speaking of lenses, Sony also explained that a new range of lenses will be released for its full-frame series of cameras. Currently, only the 28-70mm f3.5-5.6 OSS will be available as a kit lens for the A7. Upcoming lenses include the 24-70mm f4 Carl Zeiss OSS (January 2014), 35mm f2.8 Carl Zeiss (November 2013), a 70-200mm f4 Sony G OSS (TBC), and a 55mm f1.8 Carl Zeiss (December 2013).

In addition to these two amazing full-frame cameras, we were also introduced to the RX10, a new compact camera with an incredibly impressive integrated zoom lens. This camera has a 20.2MP Exmor R sensor that measures 1-inch and the very same processor used in the A7 and A7R. The most impressive thing about this camera though, is the fact that it is paired with a Carl Zeiss lens that has a zoom range of 24-200mm, with a constant maximum aperture of f2.8. In addition, the RX10 also has Wi-Fi and NFC connectivity. During the brief hands-on session, we managed to play around with all three models and were highly impressed. All three cameras are made with magnesium alloy, providing a very sturdy build quality. Both the A7R and A7 are quick to start up and have a new UI that's easy to navigate. These few tweaks have made the A7R and A7 both very serious contender in the full-frame market, but only time will tell. As for the RX10, this camera is in a class of its own, thanks to the very impressive fixed lens. It doesn't weigh a ton and it's pretty responsive for a compact camera. From what we've seen, this camera will pose a serious threat to the competition.

Pricing for all three cameras are yet to be confirmed. In terms of availability, however, expect to see the A7 and A7R in the market late in November, while the RX10 will be available in early December.