Meet the Skarp Laser Razor, the world’s first razor that has no blades! Instead, it uses a laser beam that promises an irritation-free shaving experience and an incredibly close shave. As you would have guessed, the laser beam burns, instead of slicing your facial hair.

Unlike a lightsaber, whose beam is constantly on, the laser on the Skarp is only fired when it comes into contact with hair and detects chromophore - a particle in hair that absorbs particular light wavelengths. 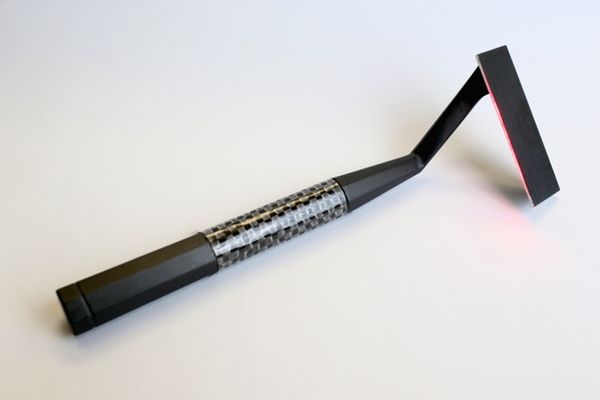 Like a lightsaber, the aluminium prototypes of the Skrap looks like it would be at home in any self respecting Sith’s toiletry bag with it’s black angular shaft and red laser. There’s also a silver version for those of you who think of yourselves as Jedi.

With over 5,000 backers, the Skarp has fulfilled its goals many times over, but there is still a chance for you to pledge to get one for yourself.

For those of you who are not into Star Wars, the benefit of the Skarp includes no scratches, no razor burns, no infection, no accidental cutting, no irritation, no expensive cartridges replacements, and little to no water usage.

The Skarp Laser Razor is expected to ship as early as March 2016. It may be a little late for Star Wars: The Force Awakens, but perhaps it will be in time for Episode 8.