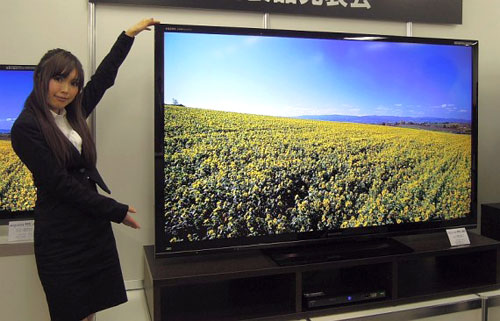 Sharp Corporation recently unveiled a fresh wave of Aquos Quattron LCD TVs in Japan. Tagged under the Aquos Quattron G series, the new range of televisions will continue to feature Sharp's Quattron technology which utilizes a mix of red, green, blue, and yellow sub-pixels. Larger screen are also on the cards, for six models will be released altogether, ranging from 40 to 80 inches.

Based on Akihabara News' report, all G-series models will be 3D-capable, including features such as an UV2A Panel, LED backlights, a 7,000,000:1 contrast ratio, a 240Hz Panel, and Sharp's newfangled Audio Engine. The new bunch of G series LCD TVs will offer support for DLNA as well as Sharp's Aquos Android remote app too. Similar to Samsung's and LG's latest breed of HDTVS, the Aquos Quattron G series models will also flaunt a dual-core image processor to improve the speed and accuracy of the TV's imaging process. The new processor is said to be capable of analyzing the brightness and frequency of each video frame before selecting an appropriate correction algorithm.

As for Smart TV features, Sharp's latest HDTVs are supposedly capable of "recommending TV programs and related information available on the Internet when the Home button is pressed". Little else is known if Sharp's televisions are capable of more than that. Apart from the new G-series, the Japanese CE maker is also said to be planning for a 4K-resolution TV before the year is over.