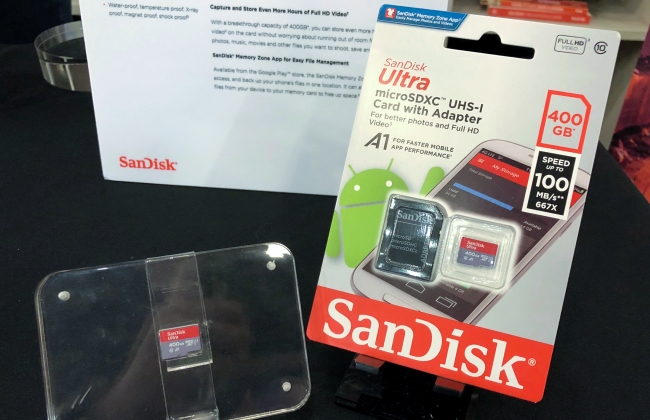 Update (November 9, 2017): Local pricing and availability for the 400GB SanDisk Ultra microSDXC UHS-I card and SanDisk iXpand Base added to the article. Officially announced in August, SanDisk’s 400GB Ultra microSDXC UHS-I card is said to be the largest capacity microSD card in the world. In case you were wondering, 400GB is enough to hold 40 hours of Full HD videos or roughly 120,000 high-resolution photos.

In addition, it supports transfer speeds of up to 100MB/s, which means you can move up to 1,200 photos a minute. It is also fast enough to record Full HD videos.

The 400GB Ultra microSDXC card is also classified as an App Performance Class A1 device. This means Android users can install apps on it, and it should run briskly.

It will be available to purchase at  11street, Lazada, and Shopee from December 2017 onwards for RM1,499. It also features a 10-year limited warranty. The SanDisk iXpand Base is a nifty little device that charges and backs up your iPhone at the same time.

The size of a small box, the iXpand Base features a Lightning port for users to connect their iPhones. When connected, the iXpand Base automatically charges and backs up photos, videos, and contacts on the iPhone.

The iXpand Base charges with 15W of power (Apple provides a 5W charger), so charging times should be significantly reduced.

One thing to note is that the iXpand Base only backs up your photos, videos, and contacts, and not your apps or other data. For a full device backup, you should still use iTunes or third-party iOS backup apps like iMazing.

The iXpand Base is available in 64GB, 128GB, and 256GB capacities points. Prices are RM369, RM529, and RM899 respectively. You can get them from Apple Premium Reseller stores, 11street, Lazada, and Shopee.