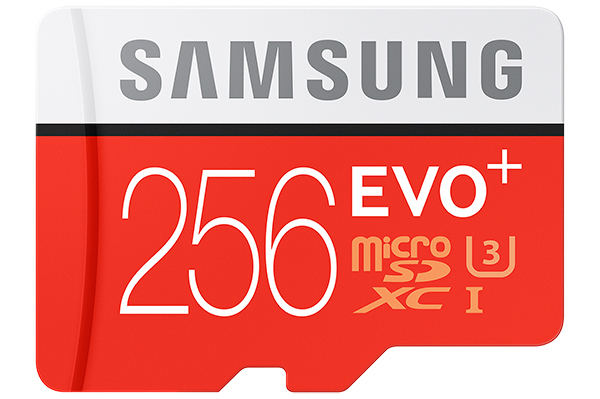 Samsung has announced its new high-capacity EVO Plus 256GB microSD card, edging out the 200GB SanDisk Ultra card for the top position in microSD density. The latter microSD card was announced in early 2015, and the new Samsung storage card one ups it by using 48-layer 3D TLC V-NAND instead of more traditional planar NAND.

The EVO Plus 256GB is classified as a UHS-1 Class 10 card, and offers up to 95MB/s and 90MB/s of sequential read and write speeds respectively. That should be sufficient for things like high-resolution photography, 4K video recording, and even 360-degree video. These speeds also make it marginally faster than the SanDisk Ultra 200GB, which is claiming up to a 90MB/s sequential read speed (SanDisk didn’t list a figure for write speeds).

3D NAND involves stacking layers of memory cells on top of one another like a skyscraper, thus allowing Samsung to achieve higher storage densities than SanDisk’s planar offering. With that said, both microSD cards are backed by similar 10-year warranties.

Just how much can you store on the card? According to Samsung, there’s space for up to 12 hours of 4K video, or 33 hours of Full HD video. Alternatively, if you’re more of a photography buff, the card can reportedly hold up to 55,200 photos with a resolution of 4,032 x 3,024 pixels.