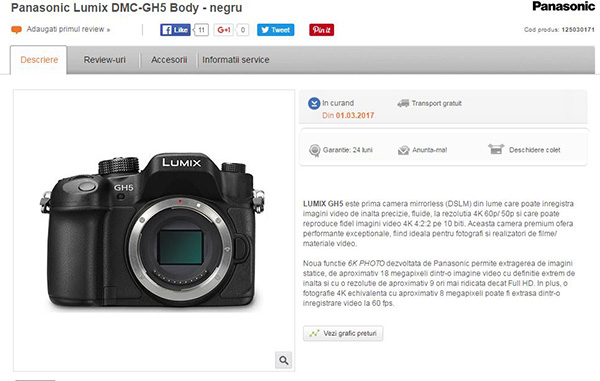 A 4/3 Rumors reader from F. Profesionala has just spotted the rumored Lumix DMC-GH5 up on Romanian photo gear site f64.ro with an estimated shipping date of March 1, 2017.

It doesn’t seem like there are pricing details, but from the translated text, we can see that the GH5 will do 4K 60p/50p video, and produce 4K clips with 4:2:2 10bit sampling. There’s also supposed to be a new 6K photo feature which will give you 18MP stills from short video clips. 4K photos equivalent to 8MP stills can also be extracted from 60fps video recordings, offering you even more options to capture the moment.

More information about the camera (according to 4/3 Rumors) is as such:

Something to look forward to if you’re looking for a portable camera for video purposes perhaps?