Fuji Rumors just shared news that a Japanese blogger and avid Sentaku Magazine reader said that an article he just read reported that Nikon is in huge trouble, and is looking for investors. This blogger also said that since Chinese, Japanese and Korean companies have been reported to be interested, the Japanese government is moving to try to keep Nikon in Japanese hands by reaching out to companies like FUJIFILM.

Now as you can imagine, this created quite a storm across the web, especially with Nikon fans. Nikon Rumors was quick to dismiss this as 'fake news', saying that the blogger didn’t have the credentials to be taken seriously.

The whole issue definitely started a lot of comments on both websites. However, looking into the blog post in question, it seems like the blogger merely shared his opinion that it would be very interesting if FUJIFILM did indeed step in to save Nikon, as it would reflect on how drastically photography has changed from the days of silver halide to today’s smartphone cameras.  It also seems like he thinks that even if this does happen, it may not mean a drastic realignment of the camera market. 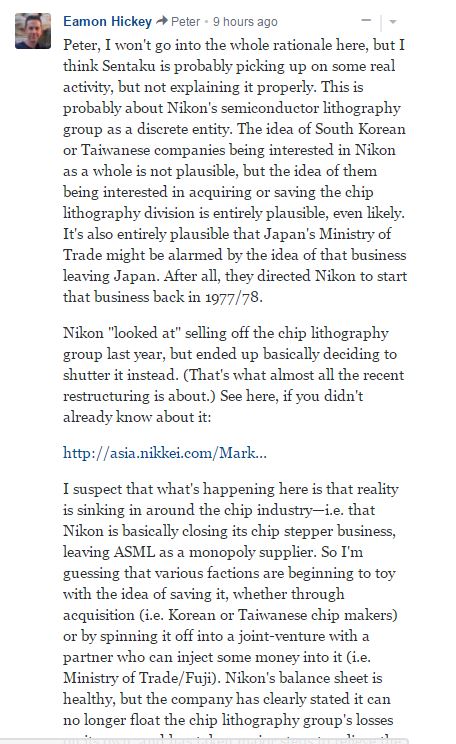 That’s fairly different from the claims of doom for Nikon you see from some Fuji Rumors readers, but Nikon Rumors reader Eamon Hickey has actually taken a different track, saying that the story could perhaps be referring to Nikon’s semiconductor lithography group as a discrete entity. That segment is being dominated by Dutch firm ASML so it could be that the various investors mentioned are trying to step in to prevent chip lithography from becoming ASML’s monopoly.

Either way, we’ll have to wait till the English version of the article appears on Sentaku Magazine to find out more, as only a previous article detailing how Nikon group as a whole is suffering from losses is available.

If anything though, this just proves how passionate people are about the camera brands they support, and that’s always a good sign if you’re looking at the sustainability of a brand.

Previous Story
Samsung could be unveiling the Galaxy Note 8 in August
Next Story
Jabra Elite Sport launches in Malaysia for RM1,259