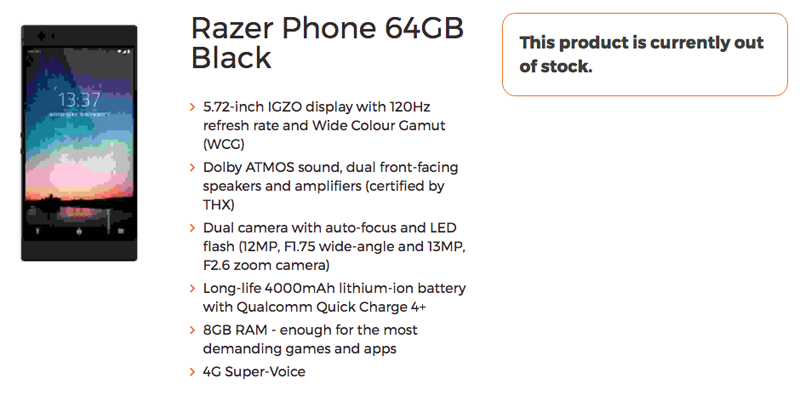 It looks like Razer isn’t going to be spared from the leaks that have been plaguing smartphone manufacturers since time immemorial. With less than 24 hours to go until the company is expected to unveil its first-ever smartphone, 3G UK – a mobile telco provider in the United Kingdom – has unintentionally jumped the gun by listing the Razer Phone on its website, but has since taken it down.

But not before the internet managed to capture a screenshot of it, however. If what we’re seeing is to be believed, the upcoming Razer Phone will be equipped with a 120Hz 5.72-inch IGZO display, a whopping 8GB of RAM, 64GB of internal storage, a massive 4,000mAh battery that supports Qualcomm’s Quick Charge 4.0+ technology, and, of course, THX-certified dual front-facing speakers with Dolby Atmos audio.

As with most smartphones these days, the Razer Phone will also purportedly have a dual camera system, which comprises a 12MP f/1.75 wide-angle camera, and a 13MP f/2.6 zoom camera.

If you were to supplement the information above with the leak that was posted by GFXBench a couple of weeks ago, the aforementioned 120Hz 5.72-inch IGZO display of the Razer Phone will have a 2K (2,560 x 1,440) resolution, and tasked to keep things running like clockwork is a Qualcomm Snapdragon 835 processor.

Not long more until we find out for certain whether these specifications hold any weight, because Razer will be announcing its new pride and joy tomorrow, Thursday, November 2, at 3:50am (GMT+8). All you night owls can even catch the livestream on Razer’s official Facebook page.