Qualcomm's Snapdragon 820 will fight malware in real-time, thanks to neural chip

Qualcomm's Snapdragon 820 will fight malware in real-time, thanks to neural chip 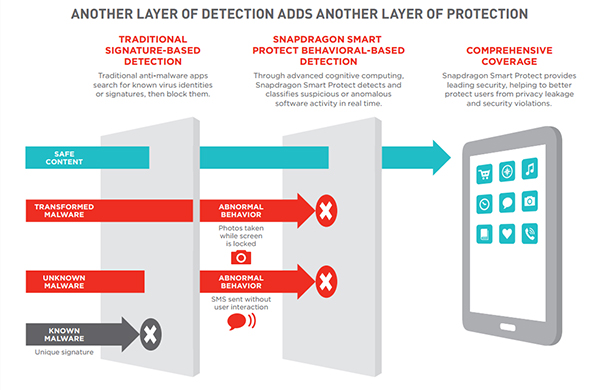 Qualcomm has announced that its Zeroth neural chip could provide on-device cognitive computing technology to fight malware more intelligently and in real-time. Qualcomm first unveiled the Snapdragon 820 and its Zeroth platform at Mobile World Congress (MWC) 2015, but this is the first time we’ve received details on how the two will work together in practice.

The Zeroth neural chip will enable a malware behavior analysis feature called Qualcomm Snapdragon Smart Protect, allowing mobile devices to respond more effectively and adapt to the burgeoning mobile threat landscape. The Zeroth chip uses cognitive computing technology – it was designed to be able to think like a biological brain and learn from your surroundings in order to function more effectively.

Snapdragon Smart Protect is intended to address a key weakness in many anti-virus and anti-malware applications today. If you rely on such software yourself, chances are it protects you by checking potential threats against a known database, and god help you if you find yourself the unwitting victim of something brand new. Unfortunately, zero-day (meaning there’s no existing solution) or transformed malware do not show up on the list of known threats, so they could slip past your anti-virus solution.

This is where Smart Protect comes in, working to sniff out abnormal or suspicious behaviour on mobile devices in real-time. It’s far more adaptable and flexible, and will be capable of detecting new malicious apps even before their signature files have been incorporated into existing threat databases.

Suspicious applications are classified according to severity, ranging from the more destructive malware apps, to spyware and less threatening – but no less annoying – adware apps.

An additional benefit of Smart Protect is that it’s a local instead of cloud-based solution provided by the on-device Zeroth chip, so third-party programs will have no way of knowing what you’ve installed even when they scan for malware.

If you’re concerned about the effect it might have on battery life, Qualcomm says that it will consume little power as it has actually designed the technology from ground up for mobile, allowing it to take advantage of deep access to the entire hardware and software stack of the Snapdragon 820 SoC.

Qualcomm says that we can expect consumer devices with Snapdragon Smart Protect to appear as soon as the first half of 2016, together with the Snapdragon 820 SoC. Qualcomm is making the API for Smart Protect available, so solutions from mobile security providers like Avast, AVG and Lookout will likely debut at the same time. Smart Protect is part of Qualcomm Haven Security Solutions, which includes the ultrasonic Sense ID 3D fingerprint scanning technology.