Qualcomm’s Snapdragon 820 has been made official

Qualcomm’s Snapdragon 820 has been made official 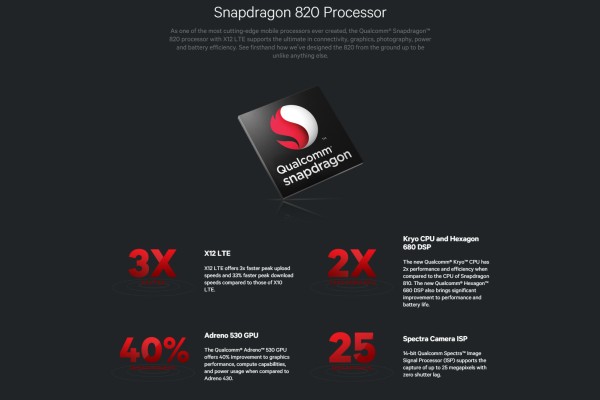 Qualcomm has finally made their Snapdragon 820 SoC official, and the company is apparently planning to have it become the de facto processor in many of next year’s flagship Android smartphones.

According to the article posted on KitGuru, the new Snapdragon 820 is poised to be better than its Snapdragon 810 SoC, which was plagued with several issues, chief among which being overheating and a poor power draw. The new Snapdragon 820, Qualcomm says, is marked improvement over its predecessor with approximately 40 percent better energy efficiency and thermal management.

In the past, Qualcomm had also said that their new Snapdragon 820 SoC would be able to fight malware in realtime, as well as take advantage of faster 4G LTE bandwidth speeds of up to 600Mbps, thanks on no small part to the new X12 LTE modem that’s built into the SoC. It will also have something called the Zeroth platform.

The Snapdragon 820 uses a specifically designed 64-bit Kyro CPU along with an Adreno 530 GPU to maintain a high performance level on mobile. Further, this processor will be Qualcomm’s first chip to be built upon the 14nm die process.

To date, there are no official list of companies that will be using this processor as of yet, although there are rumors that Samsung (unsurprisingly) and LG have already shown interest in putting this mobile processor into their future flagship phones. You can read more on the new SoC on the company's official webpage.

Previous Story
Take a look at the Sony Alpha 68, an SLT that has 79 phase-detect AF points
Next Story
AMD is being sued for supposedly misrepresenting Bulldozer core count (Update: AMD issues official statement)