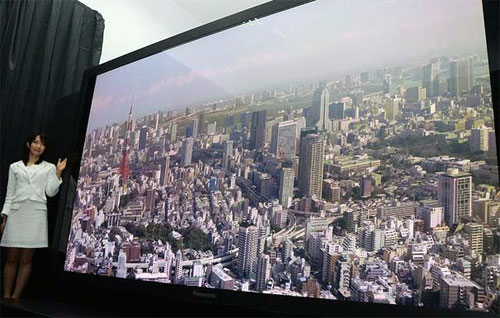 In the bid to win consumers' hearts, television makers have tried every trick possible under their sleeves. Recent history has brought us LED backlights, 3D panels, the Smart TV evolution, and even inflated screen sizes. And now it appears that the size war is just about to get bigger. Barely three months ago, LG unveiled a 84-inch 3D prototype display with a 3,840 by 2,160 resolution (also known as 4K) during CES 2012. Now Panasonic is looking to one-up the competition with their latest 145-inch prototype plasma TV; the result of a working partnership with Japanese broadcaster NHK.

Panasonic's Super Hi-Vision TV is allegedly the world's first self-illuminating display with more than 34 million pixels to punch out a 7,680 by 4,320 resolution, or 8K. According to Engadget's report, both companies have also engineered a new drive method which scans the pixels vertically to acquire a more uniform picture quality. Specs wise, the 145-inch monster will carry a 16:9 aspect ratio, a frame rate of 60fps, and a pixel pitch of 0.417mm. These bits were extracted from Panasonic's press release, but you might have to translate the document though if reading Japanese isn't quite your forte.

NHK will flaunt the new display during its open house in May. There's no word on its price as yet. However, even if one could afford the giant plasma panel, finding wall-space for this colossal TV is another challenge by itself.