The Oppo Mirror 5s is unveiled, runs on Snapdragon 410 and Android 5.1 Lollipop

The Oppo Mirror 5s is unveiled, runs on Snapdragon 410 and Android 5.1 Lollipop 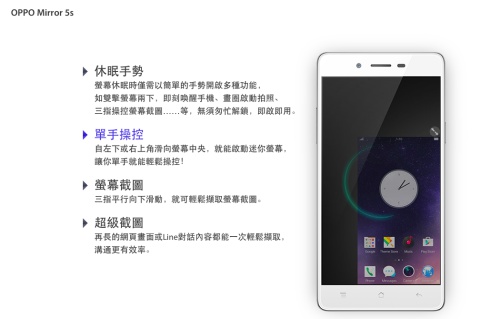 Oppo is getting very aggressive in the midrange market segment this year as it has just unveiled another new smartphone in this category.

Known as the Mirror 5s, the handset runs on ColorOS 2.1 which is based on Android 5.1 Lollipop. Powering the Mirror 5s is a Qualcomm Snapdragon 410 quad-core 1.2GHz processor with 2GB RAM and a 2,420mAh battery. It also has a stylish design on its rear with crystal-like pattern and a metallic frame.

It will be available in Taiwan and should be launched in other markets from this month. Unfortunately, there is no information on its pricing. Oppo also recently launched two mid-range handsets, the Neo 5 (2015) and Neo 5s last month.