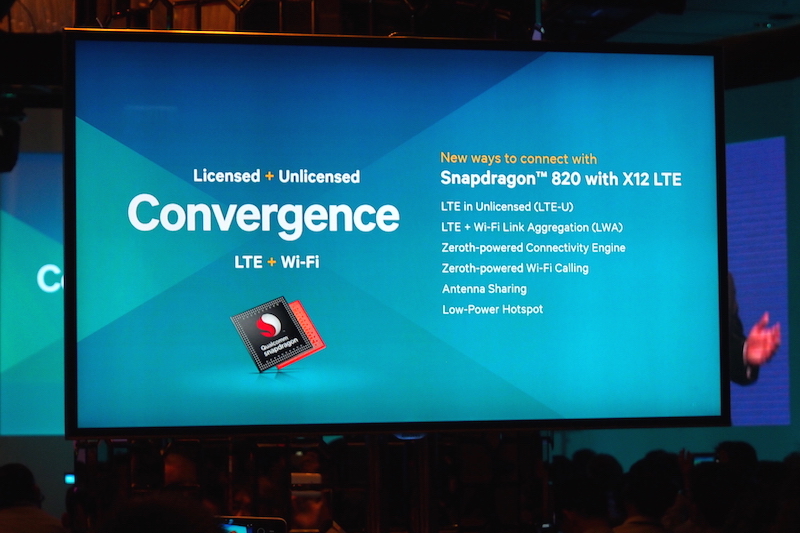 Blazingly fast and reliable mobile data speeds will be the new highlight for flagship smartphones of tomorrow. Qualcomm announced their newly upgraded X12 LTE modem, one of the few processors that's built onto the Snapdragon 820 SoC (System on Chip), which is responsible for many of the connectivity support features of the upcoming Qualcomm flagship processor. 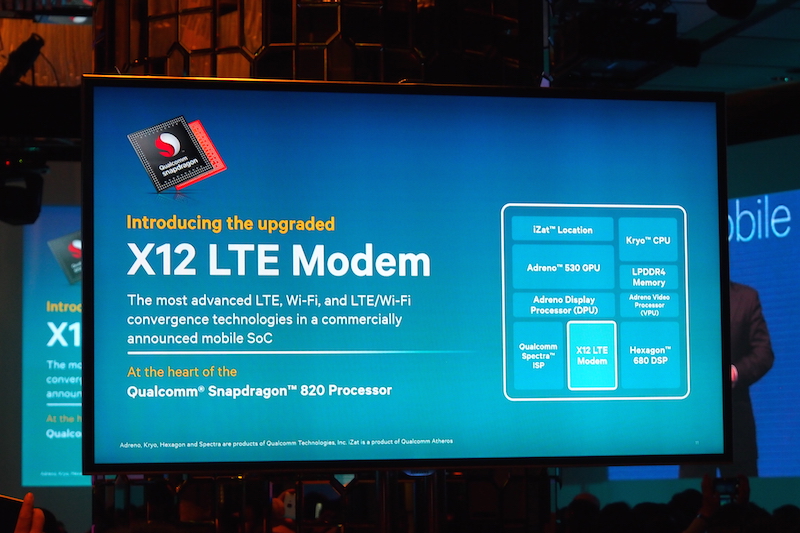 At a glance, the X12 LTE modem can allow mobile devices (that has Snapdragon 820) to support LTE Cat 12 (up to 600Mbps) for the downlink, and LTE Cat 13 (up to 150Mbps) for uplink. Compared to the X10 LTE modem (found in the Snapdragon 810), it gives a 33 percent and 200 precent increase in download and upload speeds respectively.

Besides speed upgrades, the X12 LTE modem inside Snapdragon 820 has other features that maximizes available network bandwidth in your area. At the Qualcomm 3G/LTE summit in Hong Kong, Cristiano Amon, Qualcomm's Executive Vice President and Co-President of Qualcomm Technologies Inc., said that the current focus of network connectivity is "making the best use of the best spectrum for the best performance”, by optimizing how the Snapdragon 820 works with existing and near-future infrastructure for connectivity through having newer and better processors. 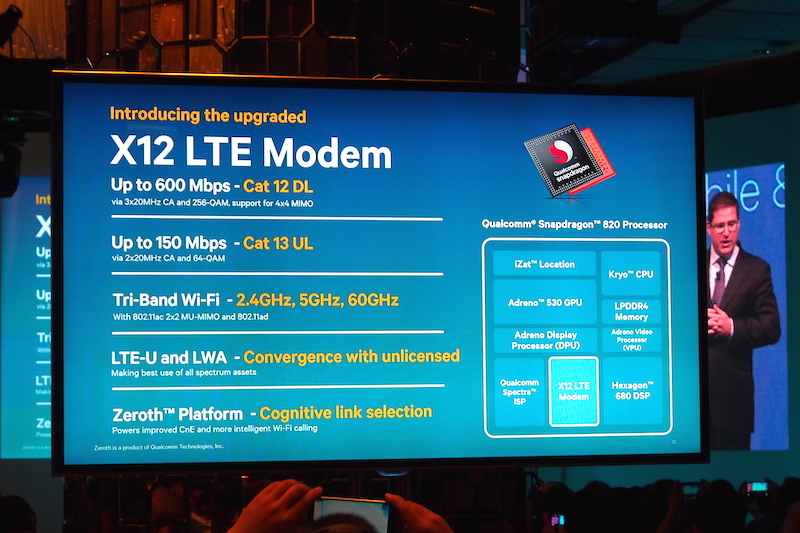 Beyond LTE network support, the X12 LTE modem has 4x4 MiMO (Multi-Output) support - a four-antenna design that is made to double download throughput (actual) speeds via a single LTE carrier. For users, this translates to the newer smartphones having significantly faster web loading times even with existing LTE infrastructure in their country.

Another antenna feature is the Advanced Closed Loop Antenna Tuning - a feature specially made for the increasing number of handsets that uses a metallic chassis. When paired with the QFE2550 Antenna Tuner, it can reduce dropped calls to nearly zero, with lower overall power consumption (when compared to older processors). 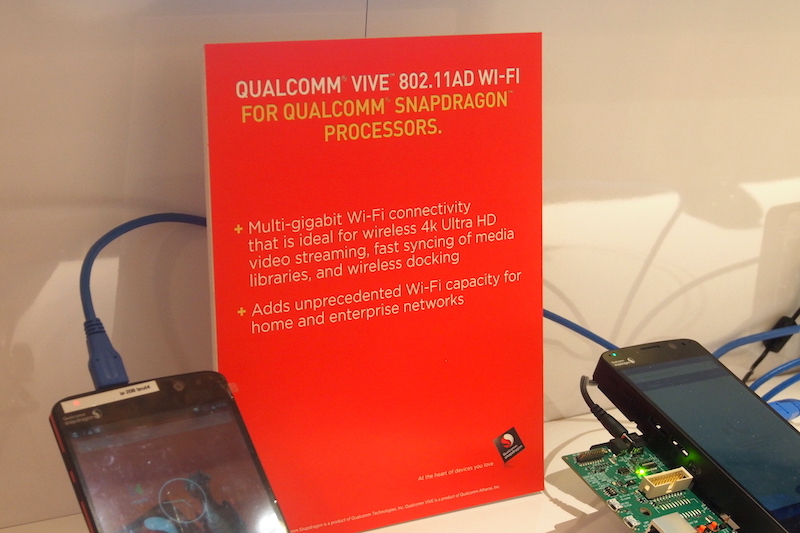 Wi-Fi is not neglected either. The X12 modem updated 802.11ac Wi-Fi support with MU-MIMO (Multi-User MIMO), as well as tri-band support (2.5GHz, 5GHz, and 60GHz), through 802.11ad Wi-Fi. Together, future devices to have a range increase of another 50 percent over its 1x1 configuration. 802.11ad Wi-Fi (which will be officially out later this year) will have a peak rate up to 4.6Gbps, at a power consumption rate similar to using 802.11ac. 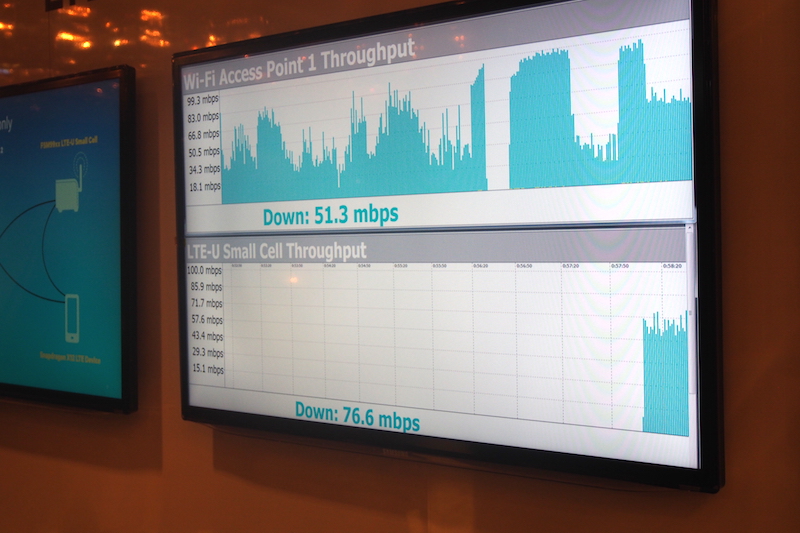 The Snapdragon 820 processor also comes with more goodies, such as support for unlicensed LTE bands (known as LTE-U). With the right pairing (WTR3950), the chip would allow existing users to enjoy larger and more stable download speeds on crowded networks, with the processor aggregating (mixing and using) licensed and unlicensed LTE bands used by their telco. The processor also makes it possible to do with same with Wi-Fi, by using existing Wi-Fi infrastructure by telcos to improve LTE network capacity. Using the aggregated Wi-Fi and LTE mix will provide connection speeds that are almost as good as using the unlicensed LTE band.

The X12 LTE modem has cognitive abilities (via a part of the modem dubbed Qualcomm Zeroth), and part of these abilities make voice or videos over LTE networks more stable and continuous. The same machine learning chip was teased earlier at MWC 2015, with Qualcomm showcasing its ability to learn the user's environment. Applying Zeroth to the X12 LTE modem results in a processor that can make decisions based on your LTE and Wi-Fi habits, as well as helping to decide if there is a need move your call to the Wi-Fi network or LTE network, without the call dropping on the user, in real-time.

With the 4x4 LTE MIMO, support for unlicensed LTE bands, and 2-stream Wi-Fi support, this also makes multiple antenna sharing schemes possible with Snapdragon 820 devices. In turn, antenna sharing support also allows the device manufacturer to have an easier time designing their devices, since the multiple support add-ons would mean reduced negative impact on the effectiveness of the chip's connectivity.

In a nutshell, the Snapdragon 820 is very well future-proof, with a ton of features that support Wi-Fi types that have yet to hit the market, as well as infrastructure compatibility that most telcos around the world have yet to implement. Sadly, Qualcomm did not announce an official release date of the Snapdragon 820 SoC yet, despite the company also announcing new mid-tier processor Snapdragon 617 with an estimated launch date of end-2015 and the new Snapdragon 420, which is already expected to launch by Q2 2016.