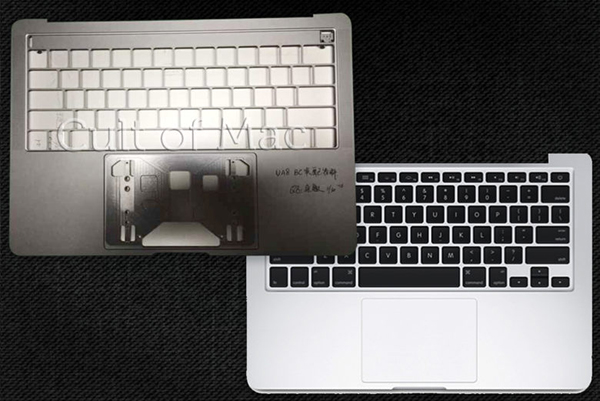 More leaked photos of Apple's new MacBook Pro have surfaced and they point towards the new notebook having an OLED touchpad above the keyboard.

Rumors of this OLED touchpad started gaining steam about two weeks ago, and the latest leaked photos of what seems to be Apple's latest MacBook Pro purportedly show that the new notebook will not have a physical row of keys in where the function keys would normally sit.

In addition, the leaked photos also show a substantially thinner chassis, and cut-outs for four USB Type-C ports. If true, this would mean that the new MacBook Pro would not have any conventional USB Type-A ports nor Thunderbolt or HDMI ports.

It would also be a bold move for Apple, seeing that USB Type-C devices aren't incredibly widespread at this point of time. That said, Apple isn't one to shy away from making such drastic decisions if it would allow them to create a thinner device. In the pursuit of ultimate portability, the ultra-thin MacBook only has a single USB Type-C port.

Apple is widely expected to unveil the new MacBook Pro at WWDC in a week's time.

Previous Story
Rumor: NVIDIA may do away with mobile versions of the GeForce GTX 10 series GPUs
Next Story
Rumor: iPhone 7 to sport 21MP rear camera, iPhone 7 Plus has dual 12MP cameras