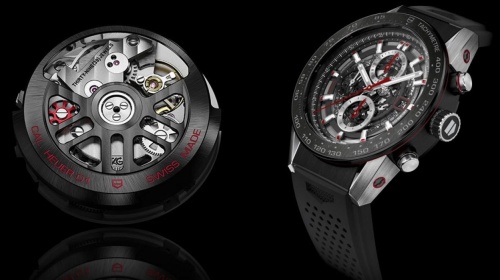 Tag Heuer has officially given a name for its first luxury smart watch which is the Carrera Wearable 01.

According to tech site Wareable, Tag Heuer CEO Jean-Claude Biver revealed the name during an exclusive interview a few days ago. Biver also hinted that the luxury smart watch will inherit design cues from the recently announced Carrera Heuer 01.

Wareable -"There is no other choice for Tag Heuer than to have all its DNA, all its watchmaking emotion and flair into the connected watch. Somehow, one should not see from a certain distance the difference between a Carrera Heuer 01 and a Carrera Wearable 01."

The Carrera Wearable 01 is expected to be launched by November with a price tag of around US$1,400. Powered by Android Wear and Intel components, the smart watch is stated to have a battery life of around 40 hours. It could also be the first upgradeable Android Wear device as Tag Heuer is focused on the lifespan of the product.

"If your child completed their Masters degree, you might want to give them a watch. We want to create something that will stay on your watch for a lifetime, that's what Tag Heuer does. And as the technology changes, it will change."

The Swiss watchmaker announced plans to enter the smart watch market last year so that it can remain relevant as the tsunami of smart watches comes closer.

Previous Story
Apple filed patent for six iPad accessories including a stylus and its holder
Next Story
Rumor: Samsung to announce Tizen-powered Z3 later this month