MIT, or Massachusetts Institute of Technology, is one place you can safely expect technological wizardry to pop out on a regular basis. The newest technological miracle to come out of the place is a robot, but not just any robot. 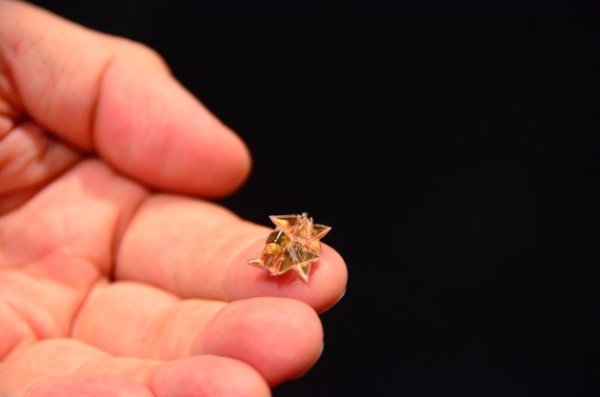 Starting life as a flat paper or polystyrene wafer, it comes to life when activated with a small heat source, folding itself up in an origami-ish fashion, giving it a physical form resembling a small moth. From here on, it can move on its own, on solid surfaces or on water. It has an average speed or 3cm/second.

This movement is made possible, thanks to two sets of magnets. One is a neodymium magnet integrated onto the thin sheet of the robot’s original flat form, and the other consists of four electromagnetic coils under the operating surface that attract and repel the main magnet, making a controlled rattling motion that leads to motion.

When the drone is done with whatever it was supposed to do, you can drop it into an acetone bath and it will completely dissolve, leaving only the magnet behind.

Leading the MIT team that designed the adorable little thing is Shuhei Miyashita. They hope that future iterations will be small enough to fold itself within a human body, operating autonomously and dissolve completely. Maybe like nanomachines of popular science fiction.

That said, one question deserves asking: "What is controlling this prototype to begin with?"

Previous Story
Windows 10 will be available on July 29
Next Story
Google I/O 2015: ATAP puts sensors in fabric with Project Jacquard