Microsoft has recently announced its new Sports Performance Platform. An analytics system made by Microsoft Garage (which is to Microsoft what Google X is to Alphabet), it serve to help coaches better understand player data and actually do something about it. 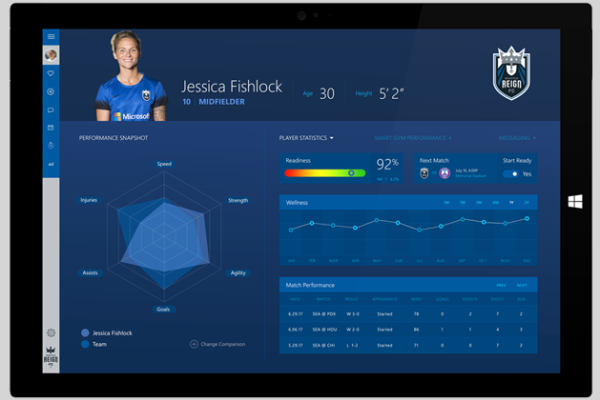 It makes use of Microsoft-proprietary tools like Power BI, Azure and Surface computers, and makes predictions of, say, when a player is at risk of injury based on their most recent performance and recovery time. “The difference between a win or a loss can be decided by an extra five minutes of wind sprints, levels of hydration or getting to bed 30 minutes earlier the night before,” says Jeff Hansen, General Manager of Microsoft Brand Studio in a blog post. He continues with “Imagine making clutch decisions that are based on insight, rather than gut,” which, in a world where numbers are everything, does make things sound pretty appealing.

Currently it’s only available as an invitation-only experiment, with pro teams like the Seattle Reign FC (U.S. National Womens Soccer League) and Real Sociedad (Spanish La Liga) already making use of the tool. Microsoft does ultimately aim to have it available to all levels of sport, which could help budding athletes still in their school leagues or other programs.

For now, the two sports that can actually make use of this tool are football and cricket, but Microsoft says that it will be working with sporting organizations like NASCAR and the PGA Tour, so we can expect this Sports Performance Platform to be compatible with golf and motorsport (or at least NASCAR) in the future.

The next question we would ask is if the tool is applicable to eSports or if it’s just a traditional, physical sports thing at the moment.