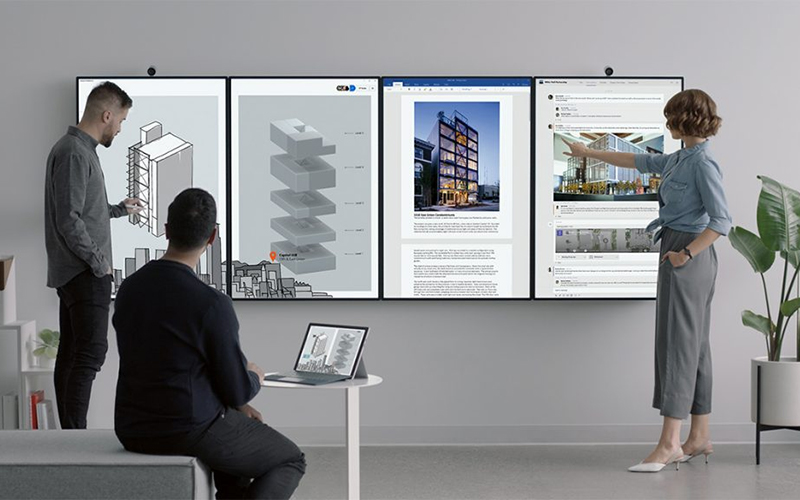 Microsoft has taken the wraps off the next generation of its Surface Hub and it looks amazing. The Surface Hub 2 sports a slick futuristic design, with an expansive display and barely any bezels.

It also appears more suited to a wider range of use cases. For instance, you can arrange multiple screens in a tile-like fashion on the wall, or just mount a single screen to an easel-like rolling stand.

The stand addresses one of the main complaints people had about the first Surface Hub, that is, its lack of portability. Microsoft is now partnering with Steelcase to develop a line of rolling stands and mounts for use with the Surface Hub 2.

The new system features a 50.5-inch 4K display, and its rotating mount allows the screen to rotate from a vertical to horizontal alignment easily. In addition, it is ditching the traditional 16:9 aspect ratio in favor of the 3:2 ratio seen on Microsoft’s other Surface devices.

Despite the ultra-thin bezels however, the Surface Hub 2 still comes outfitted with speakers, a far-field microphone array, and a camera.

There are improvements on the software side as well, and the Surface Hub 2 will now support multiple user sign-ons, making it even more suitable for workplace collaboration.

That aside, Microsoft has remained tight-lipped about more detailed specifications. The Surface Hub 2 won’t be out till 2019, so this early reveal appears calculated to drum up anticipation for the device.