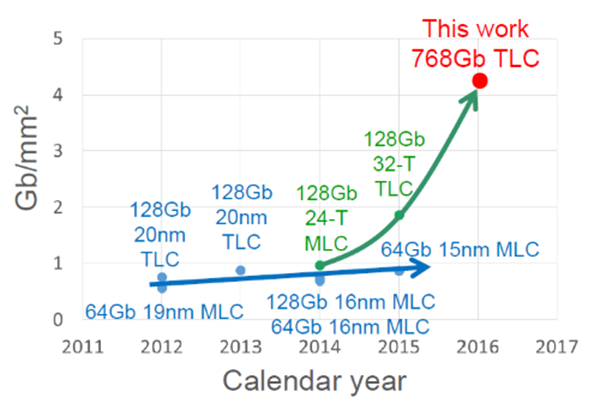 At this week's International Solid-State Circuits Conference (ISSCC), Micron presented a flash design that will enable a 768Gbit 3D NAND chip using Micron's 3-bit/cell floating gate technology. It manages a density of 4.29 Gbits/mm2 as compared to 2.6 Gb/mm2 for the most dense 256Gbit 3D V-NAND chip Samsung that ships today. For comparison's sake, most planar NAND chips only pack 1 Gb/mm2.

However, despite the capacity advantage, executives at Micron have not decided if they will actually commit to manufacturing this chip. Toshiba and SanDisk also have a 768Gbit chip in the works and expects to ship a 1Tbit chip in 2018.

Samsung, on the other hand, is aggressively ramping up its V-NAND production, but face challenges in stacking layers in its V-NAND chips. Micron currently has a 14.6 percent market share in the NAND space, behind SanDisk, Toshiba, and leaders Samsung. Samsung enjoys a market share of 34.1 percent.

No matter what, these new developments and competition can only be a good thing for consumers, as we get to enjoy flash drives with increasing capacities, performance and endurance.