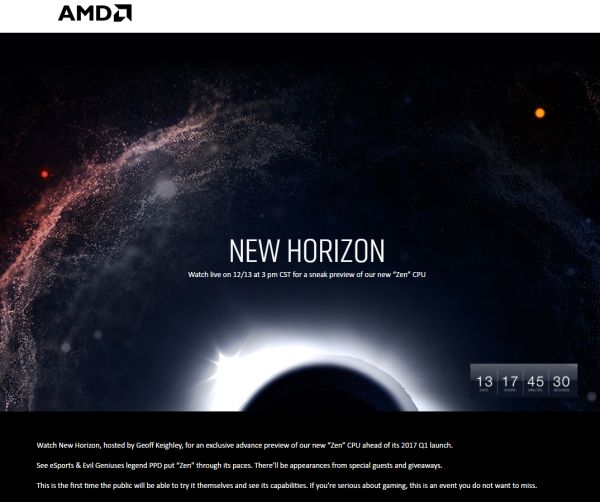 In case our title and summary wasn’t clear about the subject matter, AMD has chosen December 13, 2016 as their official date to make the announcement for their new Zen CPUs.

The event, named ‘New Horizon’, will be livestreamed over the internet on the date, and will be streamed from Austin, Texas, U.S. To keep things lively, the event will also be hosted by gaming journalist Geoff Keighley.

It’s likely that the livestream will be focused on the announcement of their new Zen CPUs, more specifically, their new SR3, SR5, and SR7 CPUs. A couple of weeks ago, we wrote that AMD’s SR7 was designed to give Intel’s Core i7-6850X Extreme CPU a run for its money. If this is true, then this might be the comeback that AMD has been waiting for.

We’ll definitely be writing up a report on what AMD will announce on the day itself, but you can also check out the livestream via AMD’s website on the launch day.