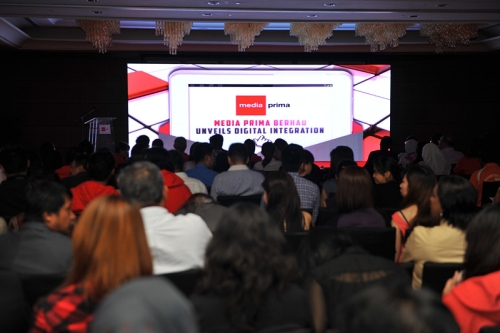 Media Prima Berhad (Media Prima or "the Group") may already be the nation's number one integrated media group but they aren't sitting on their laurels as they continue to impress and improve. Just yesterday, they unveiled their expanded digital business unit known as Media Prima Digital.

This restructuring is part of the broader Media Prima strategy to streamline and optimize its digital business that now exists across several platforms. It is envisioned that with the exercise, Media Prima Digital will take the lead to make the new media be one of the Group's core businesses, which include television, print, radio, content-creation, and out-of-home or billboards. Part of the success in this restructuring lies in the folds of Alt Media and NSTP E-Media. Alt Media is widely known for the innovation of Tonton, Malaysia's number one and multiple award-winning video portal that currently has over 2.5 million registered users and offers online 'catch-up' and 'live' television services as well as premium paid content. Besides that, Alt Media also manages the Group's television and radio networks web portals and Gua, the country's premier entertainment and lifestyle portal.

As for the digital arm of the Group's subsidiary the New Straits Time Press (Malaysia) Berhad, E-Media, it is in charge of developing and managing Malaysia's number one Malay language news portal Harian Metro Online; as well as the news portals of the country's other leading newspapers – the New Straits Times and Berita Harian. At the same time, E-Media has also developed several e-commerce application and is also developing several lifestyle portals that will be launched in phases from early 2013. “We are constantly pushing the boundaries of innovation in the digital realm by merging online expertise with our strong brands in the traditional platforms. Hence, the convergence of both digital arms will bring about an abundant of opportunities for the Group to engage with both current and potential users and advertisers, thus, enabling a complete digital experience,” said Dato’ Amrin Awaluddin, Group Managing Director, Media Prima Berhad.

“It is a constant challenge to embrace the evolution of digital and for this reason, it is important that we remain ahead of the digital curve in order to stay relevant in our business. As we embark on our journey with Media Prima Digital, we are able to exploit the vast content and resources within the group with economies of scale in terms of operational efficiencies. Content generation remains vital and Media Prima Digital will be able to support the Group’s needs towards the generation of platform agnostic content and be where the consumer is,” said Lam Swee Kim, Group General Manager, Digital and Integrated Marketing, Media Prima Berhad.

Kim added, “With Media Prima Digital, we foresee big potential with 30% growth in traffic and double digit revenue growth within the next 12 months. For the trade, based on our collective numbers, Media Prima Digital is able to provide advertisers the targeted reach and scale that it needs. The localized exclusive content will also provide high levels of customization and interactivity for advertisers.”

For more stories on Media Prima, please follow us here.