The Logitech Craft keyboard has a customizable knob for creative professionals

The Logitech Craft keyboard has a customizable knob for creative professionals 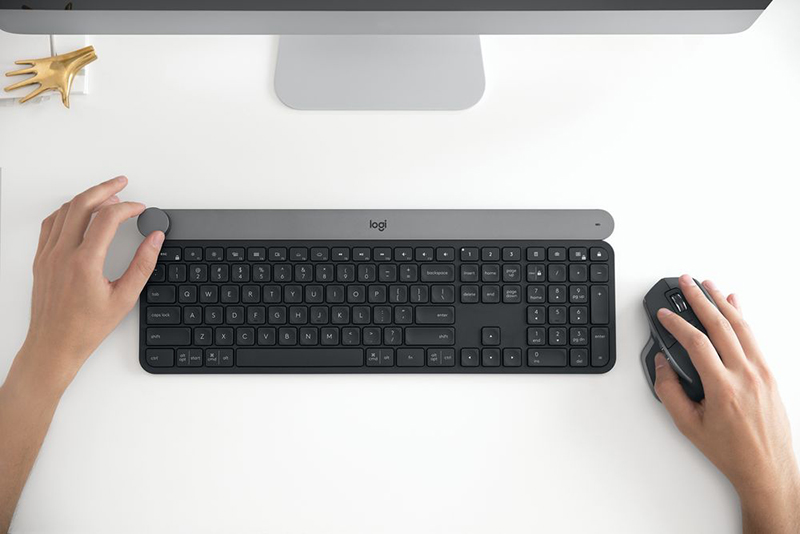 Logitech is showing itself to be quite the peripheral maker. The company announced the Craft wireless keyboard at IFA 2017, an interesting complement to its MX Master 2S mouse that is shaping up to be yet another great option for creative types.

The highlight feature on the Craft is what Logitech refers to as the Crown. This is a creative input dial that sits at the top left-hand corner of the keyboard, and comes with built-in integrations for seven apps (the Microsoft integrations are Windows-only):

The aluminum dial is also touch-sensitive, and lightly tapping it gives you access to context-specific functions. Depending on the app you’re using, that could be things like brush size, brightness, chart type, or font size, which you can then adjust by rotating the dial.

Pressing down on the dial allows you to switch functions, and Logitech says that this method of input allows for a greater degree of comfort and convenience.

The dial will work outside of these seven apps as well. In addition to more generic features like volume control or playlist navigation, you can use it to scroll between tabs in Chrome.

Logitech’s Options software will let you assign specific functions in nearly any app, but seeing as how the company is releasing an SDK for developers soon, native integrations could eventually arrive in more programs.

As for the typing experience itself, the keys are contoured to guide your fingers to the center, and the backlight automatically turns on as your hands approach the keyboard. It can also dynamically adjust to changing lighting conditions, so Logitech clearly worked hard to make everything as intuitive as possible.

The Craft features the same Flow technology as Logitech’s MX series of mice, which lets you switch between different computers by moving your mouse over. The keyboard works in tandem with the MX mice, and switching PCs on one will port the other over too.

Similarly, the Craft can connect up to three devices, and you can toggle between them using the Easy-Switch button.

You’ll be able to connect the keyboard to your PC using either the Logitech Unifying receiver or Bluetooth LE, and it’ll work with both Windows and Mac (it utilizes a dual layout design to cater to both).

We haven't any information about its local pricing and availability, but we'll report back when we do.

Previous Story
Mercedes-AMG unveils the 1,000 horsepower Project One hypercar
Next Story
Siemens Malaysia strives to become the digitalization enabler of the country