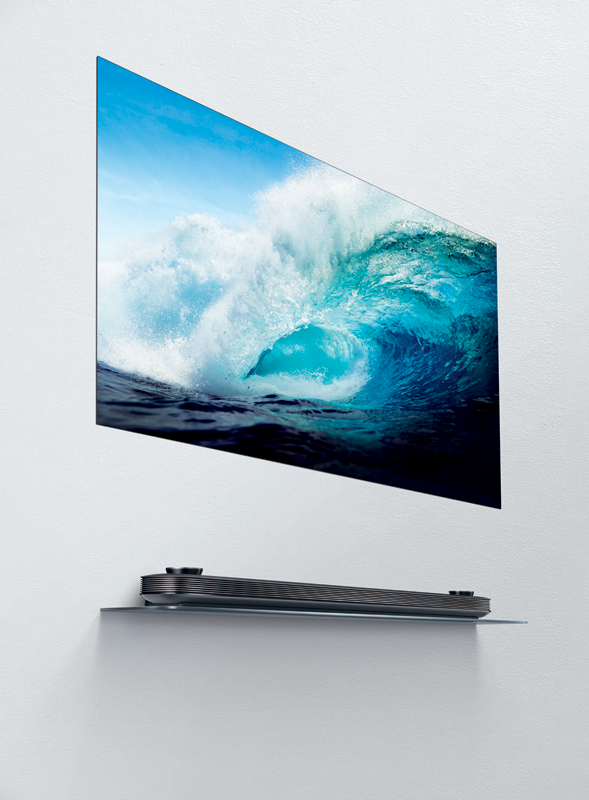 LG kicked off its annual InnoFest Asia showcase at the International Convention Center (ICC) in Jeju, South Korea yesterday. Apart from the slew of home appliances that were proudly on display, there was also a comprehensive range of OLED and Super UHD TVs on exhibition at the show floor.

Chief among which is the LG Signature OLED TV W, which actually made its first appearance at CES 2017 back in January. The Signature OLED W – otherwise known as the W7 – is easily one of the thinnest OLED TVs on the market today. Its side profile is no more than 4mm thick when mounted onto a wall using magnetic brackets, which, according to LG, “creates the illusion of gazing out a window.” The W7 is available with two screen sizes: 77-inches and 65-inches. Both of which have 4K (3,840 x 2,160) resolution and a host of impressive display technologies, such as Active HDR with Dolby Vision, Perfect Black, and Ultra Luminance.

But because of its sheer thinness, LG had to outsource the speakers of the W7 to a 4.2-channel Dolby Atmos sound bar, which connects to the W7 via a proprietary cable that’s supposed to be concealed behind a wall. Then there’s the Signature OLED TV G7 that’s likewise available with screen sizes of 77- and 65-inches. It shares the same 4K resolution, Active HDR with Dolby Vision technology, and ‘Picture-on-Glass' design as the aforementioned W7 flagship, but comes with an integrated 4.2-channel soundbar instead. But don’t worry, it supports Dolby Atmos and DTS-HD decoding as well.

LG has a number of other OLED TVs that are slated to launch in 2017, including the E7, C7, and B7. Naturally, they each have a 4K panel, HDR compatibility (HDR10, Dolby Vision, HLG HDR), and will be running on WebOS 3.5. That’s not all, LG also took the opportunity to present its third-generation lineup of Super UHD TVs: the SJ9500, SJ8500 and SJ8000, which now features Nano Cell technology to deliver incredibly accurate color reproduction. According to LG, Nano Cell technology works by absorbing excess wavelengths of light, resulting in colors that appear cleaner and purer.

What’s more, unlike conventional TVs, whose colors might appear washed out or warped when viewed at certain angles, LG’s Nano Cell Displays are capable of delivering consistent colors at wide viewing angles – that means the viewing experience should be the same, regardless of whether you’re positioned directly in front of the screen, or at a 60-degree angle from the display.

We’ve yet to receive word on when LG’s latest range of OLED and Super UHD TVs will be arriving in Malaysia, and for how much. We’ll be updating this article when we know more.

For more news on LG, please follow us here.