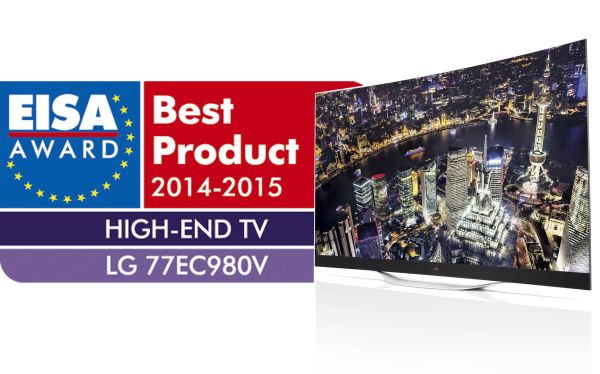 LG Electronics has just announced that a number of its products have been recognized by the prestigious European Imaging and Sound Association (EISA). The products that received awards include the 77-inch 4K OLED TV (77EG970V), the 55-inch Smart+ TV (55LB870V), the LG SoundPlate (LAB540), and the LG G3.

The LG 77-inch 4K OLED TV was awarded the winner of EISA's European High-End TV 2014-2015. This is thanks to the use of the latest technology such as WRGB technology and Tru 4K Engine Pro. As for the LG 55-inch Smart+ TV, it was the European Smart TV 2014-2015 award winner. This TV is a Full HD TV that has the highly unique webOS platform, which provides a “simple and intuitive user experience with quick, easy access to a world of entertainment”.

There was also LG's Soundplate, which won the EISA HT Soundbase 2014-2015 award. This sound bar is designed to fit under a TV to prevent being obtrusive. It provides 4.1-channels of audio, has a wireless active subwoofer, and has a total RMS of 320W. What's more, it is equipped with an integrated 3D Blu-ray player and offers Smart TV functionality.

Last but not least, the LG G3 received the European Advanced Smartphone Award for 2014-2015. For those unfamiliar with the G3, it is LG's current flagship smartphone that offers Quad HD display, a 13MP OIS+ camera with Laser Auto Focus, and many other powerful features.

Hyun-hwoi Ha, President and CEO of LG's Home Entertainment Company, said “LG will continue to push the limits of technology and design in our effort to meet the needs of consumers around the world who look to LG to deliver the best that the industry has to offer”.

More on LG can be found here.