Earlier today, Lenovo officially announced their new compact gaming PC, the Ideacentre Y710 Cube. Sporting the iconic 'Y' symbol at the front of its chassis, the Y710 Cube is a PC that Lenovo designed to be as powerful as it is compact.

Specs wise, the Y710 Cube is fitted with the hardware below: Surprisingly, the Y710 Cube doesn't have an SSD option in its pre-built options as of yet, and it's a bit strange that Lenovo would opt to install an HDD into the machine instead of the faster storage option. That being said, the company did say that they would be making the Y710 Cube variant with an SSD storage available during the first quarter of 2017. Of course, if you can't wait, you can always just manually replace the HDD yourself, but do remember, doing so would void the warranty for the entire device.

Pricing for the Ideacentre Y710 Cube begins at RM6,099, and it comes with a three-year on-site warranty. The machine will be available at all Lenovo stores and authorized resellers. 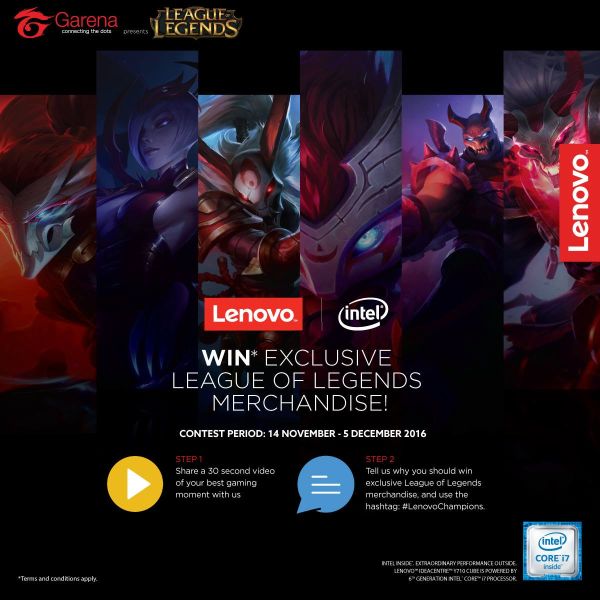 Besides the Y710 Cube, Lenovo also took the time to announce their partnership with two gaming groups. The first partnership is with Garena, and with them, both groups will be hosting the 'League of Champions,' a League of Legends contest that is designed to test the skills and wits of players and fans of the game.

Gamers around the region are encouraged to participate and play against the best in the region. The winning team will then get a chance to compete in the finals, which will be held in Bangkok from January 13 to January 15, 2017. Registration begins today, and can be done online. All you need to do is follow Lenovo Malaysia's Facebook page for updates on the event.

The second partnership is actually a platinum sponsorship agreement with Intel, where both company will be sponsoring the 'ESL One Genting', a Dota 2 tournament. With the partnership, Lenovo will be hosting two competitions in order to bring fans of the game to the ESL One Genting. At the end of the contest, two lucky winners will receive a Lenovo gaming mouse and headset. In addition, purchasing selected IdeaPads will also give you a chance to win an all-expense paid trip to ESL One Genting.

The 'ESL One Genting' will commence from January 6 until January 8, 2017 next year.