Kaspersky Lab recently announced that its Kaspersky ONE Transantarctic Expedition has reached the half-way point at the South Pole on 20 December, 2011. Led by accomplished British explorer Felicity Aston, the expedition across Antarctica - which began on 25 November, 2011 - will continue for over another month, totaling in about 60 days and 1,700km in distance. 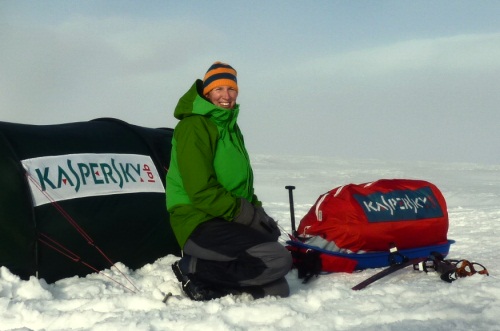 Not her first time to the South Pole, Aston has previously led the Kaspersky Lab Commonwealth Antarctic Expedition there from the coast of Antarctica in 2009.

"The South Pole isn't my destination this time, it's just a check point on my journey. But I’m nevertheless really happy to have reached it! I’ve made the journey from the coast of Antarctica to the South Pole by myself, and this in itself will always be a personal achievement I can be proud of,” commented Aston on her arrival.

Having crossed the Transantarctic mountains, pass the Leverett glacier, Aston is now determined to make her way across the Polar plateau to the Ronne ice shelf to reach the opposite coast of Antarctica.

"Felicity is a great achiever and fighter," commented Eugene Kaspersky, Chairman and CEO of Kaspersky Lab. "On her journey she has to overcome the threats of the Antarctic environment day after day. This is why we are proud to support Felicity! At Kaspersky Lab we also fight threats - in our case those in the digital environment, like cybercrime. We wish Felicity the best of luck on her onward journey.”

With Kaspersky Lab’s support, Aston will become the first woman in history to cross Antarctica alone.

For more information about the Kaspersky ONE Transantarctic Expedition, go to transantarctic.kaspersky.com.

Previous Story
LG Unveils Android 4.0 Upgrade Schedule for Its Phones
Next Story
Control Your WD TV with a Smartphone App