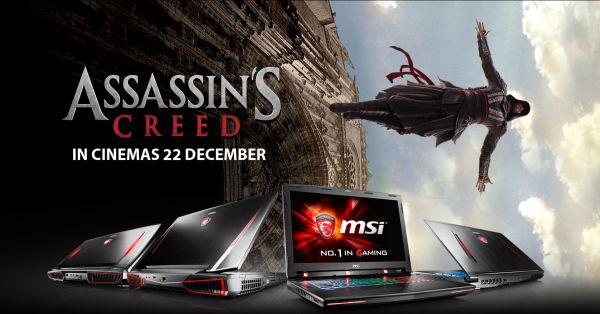 There's nothing better than being able to play your favorite PC games on the go with a powerful gaming notebook. If you've been looking for a gaming notebook to call your own, you may just find what you need from MSI, as the MSI x Assassin's Creed campaign has kicked off in conjunction with the December 22 theatrical release of the highly-anticipated big screen adaptation of Assassin's Creed. 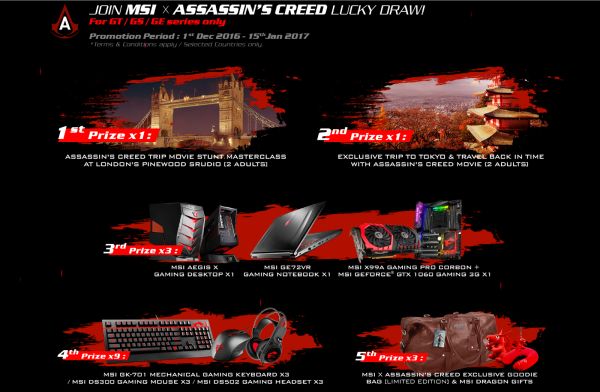 During the campaign, which started from December 1 and runs until December 15, all you need to do is purchase any MSI GT, GS or GE series of gaming notebooks, register your purchase here, and you'll be in the running for some seriously great prizes. The first prize is a trip to London's famed Pinewood Studios, where you can attend an Assassin's Creed-themed 'Movie Stunt Masterclass'!

In addition to that, purchase any MSI gaming notebook, and you will be also receive an Assassin's Creed keychain, as well as two tickets to catch the Assassin's Creed movie, while stocks last.

But that's not all, folks! There are numerous MSI events happening this month all the way till January 2017, where there will be special Christmas promotions, Assassin's Creed cosplayers, and premium Assassin's Creed merchandise giveaways. These events include the MGA Pacific Championship 2016, which is happening from December 9 to December 11 at Berjaya Times Square; the MSI Fan's Gathering on December 17 and December 18 at TGV Cinemas, The Mines, and during the Malaysian IT Fair that happens on December 31, 2016 till January 2, 2017 at the Mid Valley Megamall.