If you’re a gamer, you’ve probably thought of making your own game once upon a time. One of us did, until he was introduced to the world of coding which led him to give up immediately. He has since recovered a sliver of hope in doing so once again since finding out that it is actually possible to squeeze code for a game into a single tweet. Think about it: a working game written with 140 characters. 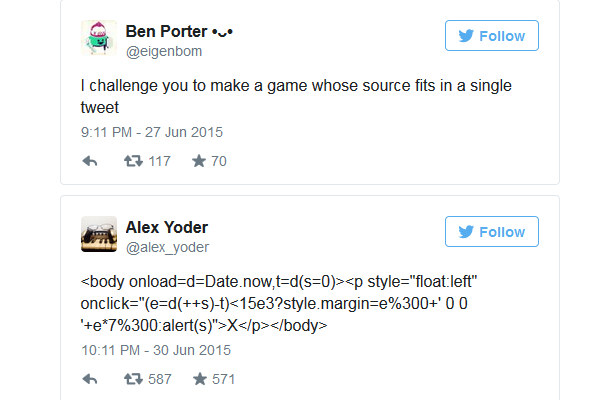 This tiny piece was written by Alex Yoder, as a response to an open challenge by developer Ben Porter. Aptly called Tiny Twitch, it’s a simple one requiring you to click on an X that relocated itself every time you do. The goal is to simply do so as many times as possible before time runs out.

You can give it a go right here. Expect to be terribly frustrated and addicted to it at the same time, as you probably did with Flappy Bird.