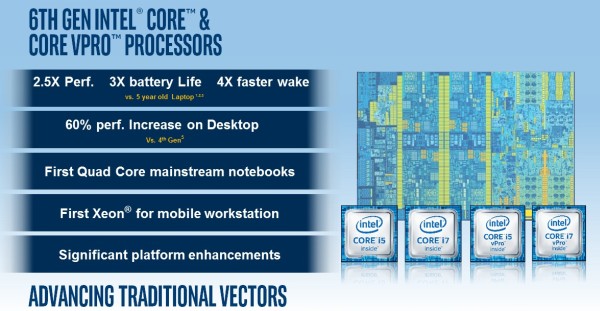 It’s been a long time coming, but Intel has finally released their Skylake processors for the business segment.

Designed with the efficiency of businesses in mind, both the new 6th generation Core and Core vPro architecture are designed to deliver a new level of productivity to offices and commercial businesses looking to maximize their potential.

Compared to the previous generation business devices and Core architecture, the new Skylake architecture is capable of performing 2.5 times better than its predecessors, has three times the battery life of devices from five years ago, and thanks to the combination of non-volatile memory working in tandem with it, devices running on the new Skylake processors can wake four times faster than its previous generation processor.

In addition to that, Intel has also announced the first Xeon processor for the mobile workstation, a feat never before done in Intel. As unbelievable as this sounds, a Xeon processor within a notebook actually gives commercial business owners and designers the ability to utilize the most intricate and complex tasks, such as running rendering programs or architectural software, either from the processor itself, or via the a combination of the processor and a third-party hypervisor.

To that end, Dell is actually one of the first companies to release a notebook using Intel’s new 6th generation Xeon processor, in the form of their Precision Series 5000 notebook (you can read our previous article about it). 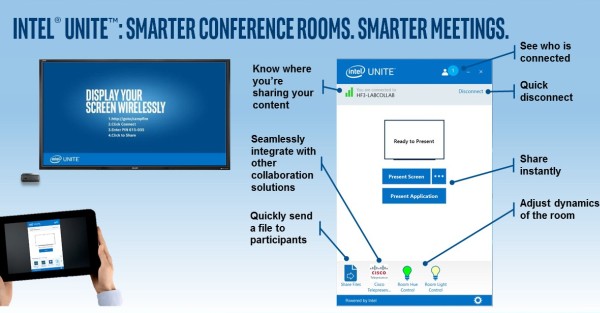 One of the new features that business owners will also be able to take advantage of through the new processors is the new Intel Unite feature.

To put it simply, Unite essentially allows a user to automatically connect to any Unite-certified device that is in a building that bears all the trimmings of this feature. The idea behind this implementation would allow users to seamlessly jump in and out of a presentation without the need for any wires or complicated procedures (e.g. password input, Wi-Fi setup, etc). This opens up and redefines the possibility of multiple conference rooms that are completely accessible for presentations, all with a single stroke from the finger. 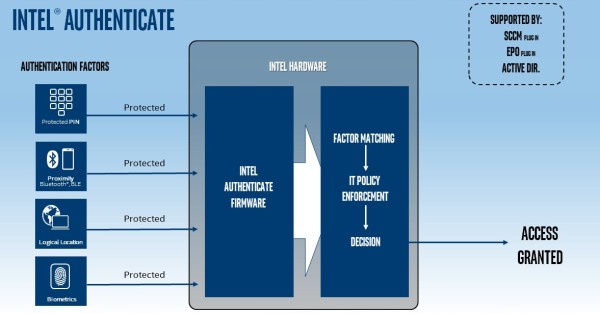 The other feature to be announced was Intel Authenticate, Intel’s new multi-layer security function, which protects authentication factors (i.e. PIN, Bluetooth connections, Biometrics) by making them go through the new firmware, as well as the embedded hardware itself.

Intel says this feature will reset the bar for identity security, but ultimately, the option to keep it active or dormant will remain at the discretion of the business owner.

Apart from features, Intel also announced that it will be releasing some new peripherals, such as the WiGig Wireless Docking station, which allows multiple users with different devices from different manufacturers (i.e. Lenovo, Dell) to dock into it wirelessly. 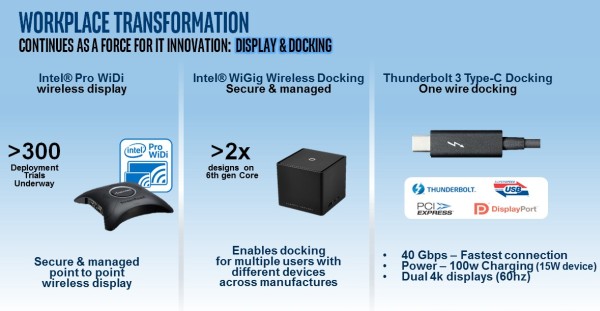 Intel has also taken its WiDi function to the next level by releasing a new Pro WiDi port, which allows for devices with WiDi capabilities to be connected securely, allowing for workplaces to truly be wireless.

Last but not least, Intel also announced their new Thunderbolt 3 Type-C docking medium. This new Type-C connector can provide up to 40Gbps in transfer speeds, act as a charger with a wattage level of 100W, and even operate two 4K displays running at a refresh rate of 60Hz.