Intel announces Broadwell-E, the successor to its Haswell-E CPU

Intel announces Broadwell-E, the successor to its Haswell-E CPU Intel’s Broadwell-E is officially out in the open, and just as before, the new Extreme CPU has been designed to be more powerful than its predecessor. As the successor to the Haswell-E, the new Broadwell-E is the first Intel Extreme CPU that is built to house 10 CPU cores inside of it (there are also 8-core and 6-core variations of the new CPU, but the highlight and star of this announcement is, of course, the 10-core powerhouse). 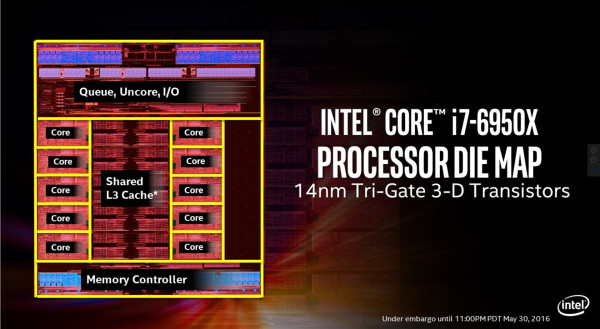 On top of having 10 cores, the new processor is also the first Extreme CPU to be built upon Intel’s new 14nm tri-gate process die, making it not just powerful, but also more power efficient, even under heavy workloads. One of the things that really surprised us is how the new CPU is capable of running single-threading and multi-core workloads simultaneously without breaking a sweat. This new Turbo Boost technology allows Broadwell-E to minimize the amount of power that it uses, simply because the feature only channels power to the cores that are being utilized, while the cores that are not being used are simply left alone and not brought up to their boosted clock speed. The end result, as Intel tells us, is an Extreme CPU that has 35 percent better performance than the Haswell-E in 3D Rendering Performance tasks. In terms of gaming performance, Intel says that the Broadwell-E attained a score on 3DMark’s Fire Strike Physics test that is 30 percent better than its predecessor, while on games such as Tom Clancy’s The Division, the CPU was stated as having maintained an average frame rate of 85 fps.

In regards to the last statement, we are slightly skeptical about these claims, and with good reason. The Broadwell-E is purely a CPU with no integrated graphics built into it. Intel did not mention just what sort of GPU they had used to achieve these claims, and because of that, we cannot make any assumptions over the GPU that was chosen for their benchmarks.

Much like how the older Ivy Bridge-E was compatible with all Sandy Bridge-E X79 motherboards, Broadwell-E is completely compatible with the current X99 chipset motherboards, which serves as a boon and works to the benefit of all currently existing Haswell-E owners, as they won’t have to purchase a new motherboard that is specific to Intel’s new Extreme CPU.

That said, you will still need to update the motherboard’s BIOS to its latest iteration, as well as install the necessary drivers that will support Broadwell-E. The new Intel Broadwell-E Core i7-6950X CPU will be available starting today, and will retail at an RRP of US$1,569 (approx. RM6,453). In addition, Intel will also be releasing three additional unlocked SKUs, alongside the Core i7-6950K. These processors and their RRPs are:

Previous Story
Of all the phones sold in China, 26 percent of them are Xiaomis
Next Story
PowerColor’s Devil Box gives desktop-like graphics performance to laptops