Inform Your Friends You're An Organ Donor on Facebook

Inform Your Friends You're An Organ Donor via Facebook 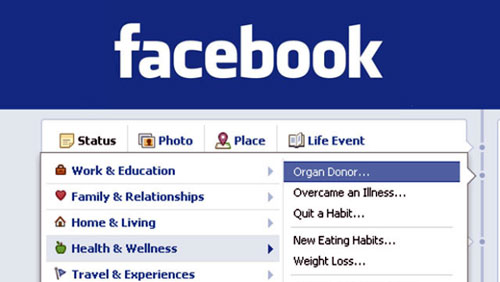 Not everyone is comfortable with the idea of donating one's organs. Our body parts should be kept intact as some would believe, dead or alive. However, there is a more subtle way of letting people know about your altruistic contributions with Facebook's newly implemented organ-donor feature.

The good news is your friends and family members can now be notified about your organ donations, but the bad news is this feature is only applicable for Facebook users in the US and the UK. Facebook's CEO, Mark Zuckerberg, first hinted at implementing this function last week during an interview with ABC News, although the official announcement didn't happen till yesterday.

To quote Digital Trends, "the new organ-donor status lets users show not only that they are an organ-donor, but also tell their story “about when, where, or why” they decided to become a donor. Facebook also provides links to state and national registries for users who have not already signed up to be an organ donor."

"Small acts of kindness happen every day on Facebook but we hope that our partnership with NHS Blood and Transplant will use the power of friendship to save lives," said Simon Milner, Facebook's Director of Policy (UK). "More than 30 million people in the UK will be able to show on their Timeline that they are either on the organ donation register already, or can register with the NHS on their Facebook page in a few simple steps. We hope that as a result of this partnership, UK Facebook users will together be able to reduce the number of people who needlessly die waiting for an organ each year."

Pocket-Lint's report also goes on to say that a thousand people perish each year in the UK while waiting for an organ. In the States, that figure is even higher at approximately 6,500. As things are, there are more than 114,000 people in the US waiting for heart, kidney and liver transplants. We doubt this Facebook feature will be made available here anytime soon, although we do hope that the local authorities would give it some thought. Lives are at stake.