IBM Research has announced the participation of Watson supercomputer in two new medical initiatives with the Cleveland Clinic faculty in the United States. IBM's supercomputer will be tasked with assisting faculty members make more informed diagnoses by making use of its natural language capabilities. 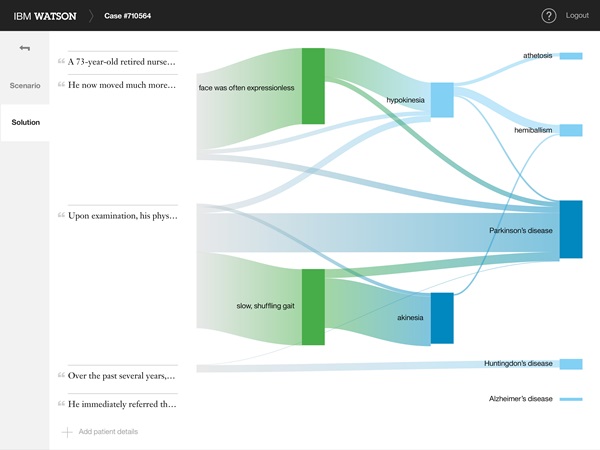 The first project is called WatsonPaths and it makes use of the supercomputer's "question-answering" abilities to examine a medical scenario from many angles. Watson is able to pull data at real-time from numerous medical sources that include "reference materials, clinical guidelines and medical journals", and " support or refute a set of hypotheses." At the same time, Watson is able to provide a decision map so that medical practitioners are able to examine additional new factors, in order to improve diagnosis and treatment options.

The second initiative, Watson EMR Assistant, is a data analytics project that aims to process electronic medical records in order to make sense of the records' intrinsic information. More often than not, such information remains untapped due to the manner such records are recorded and stored. By using Watson's "natural language expertise and machine learning abilities", Watson EMR Assistant aims to process the unstructured data format of electronic medical records like "clinical notes, lab results and medication history." As such, the project hopes to be able to point doctors and medical practitioners to key medical details of patients that may have been overlooked due to the sheer volume of data.

According to IBM Research, the Watson supercomputing spent a year with the Cleveland Medical faculty to learn the ropes, before the two cognitive computing initiatives were announced. Prior to this, Watson was more famously known for beating human contestants in the quiz show Jeopardy in 2011; however, the supercomputer's foray into medical sciences has been reported as early as in March 2011. For more information on the two newer medical initiatives, please head over here to IBM Research.