A Hyundai has become the first car to cross Antarctica

A Hyundai has become the first car to cross Antarctica

In 1916, Sir Ernest Shackleton set out to become to become one of the few men to cross Antarctica. However, the expedition was cut short when his ship became trapped and sank in the ice.

He never completed the journey, but 100 years later, his great-grandson did.

More specifically, Patrick Bergel made the 5,800km crossing of Antarctica in a lightly modified Hyundai Santa Fe.  And in doing so, the humble Santa Fe also became the first passenger car to ever cross Antarctica. 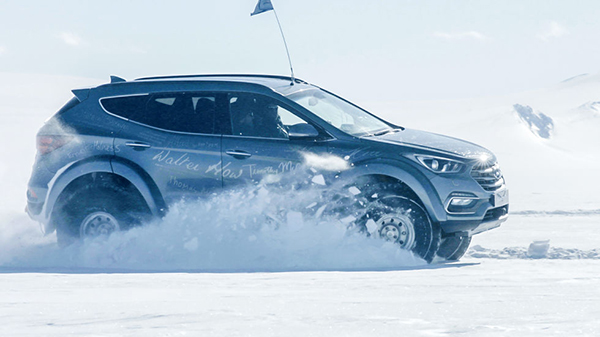 The Santa Fe is largely stock, it has a standard 2.2-liter diesel engine that customers ordering the Santa Fe can also get, and it uses stock software and transmission.

The only modifications are the engine block heater, which prevented the engine from freezing and cracking in the cold (it gets as cold as -60°C), a larger 230-liter fuel tank, and a reworked suspension with large 38-inch snow tires to help clear obstacles.

More impressively, the Santa Fe never once got stuck on the expedition. It was never towed and stopped only once for a 45 minute to tighten a loose bolt.

Crossing Antarctica is a remarkable feat for sure, but I wonder if the Santa Fe has what it takes to cope with our increasingly frequent 'ponding' situations?