After being subjected to a couple of leaks, the cat is finally out of the bag: Huawei has officially unveiled its new flagship smartphone, the Mate 10, in Munich, Germany. And yes, the leaks that you’ve seen were true – all of it.

Just like its predecessor, the Mate 9, the Mate 10 will likewise be available in three variants: there’s the standard Mate 10, the more feature-packed Mate 10 Pro, and of course, the ultra-opulent Mate 10 Porsche Design. Let’s first talk about their similarities: each of the three Mate 10 variants are equipped with the same AI-powered Kirin 970 SoC, which we’ve talked about in extensive detail two weeks ago. Its AI capabilities come courtesy of its dedicated Neural Processing Unit (NPU), which is able to offer 25 times the performance of a standard CPU despite being half its size, and requiring only 1/50th the amount of power. Apart from being the first chipset in the world to have a dedicated NPU, the Kirin 970 is also the first of its kind to achieve Category 18 LTE downlink speeds of 1.2Gbps, and Category 13 uplink speeds of 150Mbps. Both the SIM card slots of the Mate 10 supports LTE connectivity and VoLTE to help you make full use of the chipset’s impressive network capabilities. 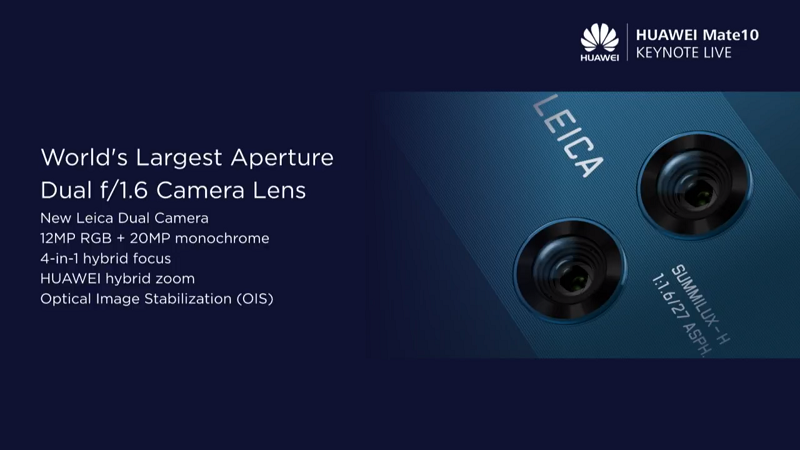 All Mate 10 variants are furnished with the same dual camera system that has been co-engineered with Leica, comprising a 12MP f/1.6 RGB sensor, a 20MP f/1.6 monochrome sensor, and Leica Summilux-H lenses. The dual camera system also features a 4-in-1 Hybrid Focus system (Laser, Depth, Contrast, and Phase-detection autofocus) to ensure lightning-fast and accurate autofocus performance. The front-facing camera, meanwhile, is an 8MP f/2.0 fixed-focus unit.

The only drawback concerning the Mate 10’s rear camera is the fact that optical image stabilization (OIS) is only available on the RGB lens, unlike the Galaxy Note8 or iPhone X, which have OIS on both their wide-angle and telephoto lenses. Remember the NPU of the Kirin 970 that we talked about earlier? Apart from providing significant performance gains, it’s also capable of recognizing more than 2,000 images per minute – or a staggering 33 images per second. Working together with its dual Image Signal Processors (ISP), the Mate 10 will be able to identify different scenes, subjects, and lighting conditions in a fraction of a second, and adjust its camera settings (color, contrast, ISO) accordingly to deliver the best results.

Apart from photography, there are a couple of other scenarios where the Kirin 970’s NPU will come in handy. Take voice calls, for example. The ‘EasyTalk’ feature of the Mate 10 will optimize the audio frequency of incoming calls so that you can hear the person on the other end of the line clearly, even when you’re in a noisy environment. And when you’re speaking softly in a quiet environment like a library, your voice will be amplified for the opposite party to hear you clearly. 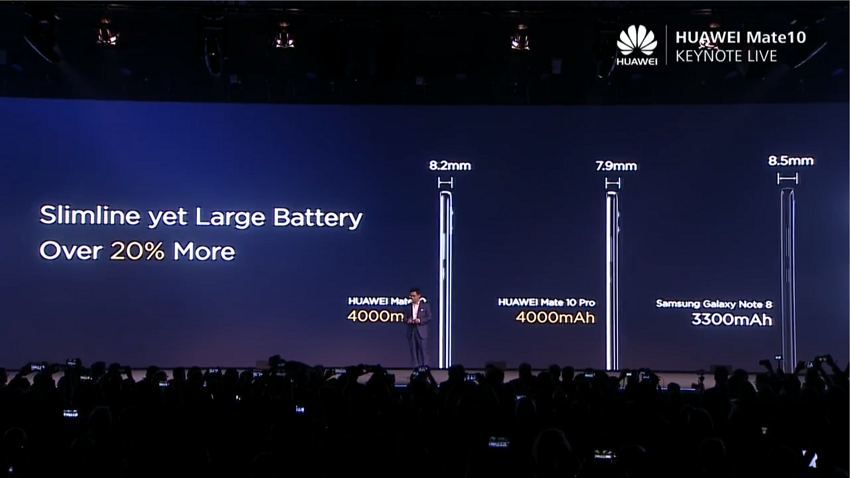 Last but not least, the three Mate 10 variants will be running on Android 8.0 Oreo out of the box with EMUI 8.0 on top, and will be powered by a large 4,000mAh battery that supports Huawei’s SuperCharge fast-charging technology. According to the company, 30 minutes would be sufficient enough to recharge the battery to 58-percent capacity. You might be wondering: "Is it safe to recharge a battery that quickly?" It should be, considering that Huawei’s SuperCharge end-to-end fast-charging technology is the first in the world to receive a safety certification from German-based TÜV Rheinland. And while both the Mate 10 and Mate 10 Pro supports 32-bit 384k high-resolution audio playback, audiophiles are bound to be peeved knowing that only the Mate 10 has a 3.5mm audio jack, while the Mate 10 Pro doesn’t – you’ll have to stick to its USB Type-C port, or use a Bluetooth headset instead. Look on the bright side, Huawei will be shipping a pair of USB Type-C, Hi-Res Audio earphones together with the Mate 10 Pro.