HP's Latest Thin Clients to be Powered by AMD and VIA

HP's Latest Thin Clients to be Powered by AMD and VIA

According to HP, the new embedded APU from AMD can provide at least 60% more performance as compared to their previous generation thin client which is based on the Intel Atom N280 processor at 1.66GHz. In terms of graphics, the built-in UVD3 decoder can deliver up to 161% more performance when benchmarked by playing 1080p WMV formatted videos. The performance that thin client customers can stand to gain with the new HP t610 is substantial and it's part of the trend in thin clients where compute processes are actively being moved away from servers to clients.

Besides performance, the HP t610 Flexible Series Thin Client can also enable its corporate customers to use multiple displays. The standard version comes with two digital display ports while the PLUS version will give the option of having up to four displays. At the press event, HP demonstrated the ability to hook up to six displays on the t610, a first for these class of devices. However, the six display option is not being offered at launch and will probably be available at a later date. This is because of additional validation that HP would need to carry out on these devices since these fanless devices are required to operate in various challenging environments. 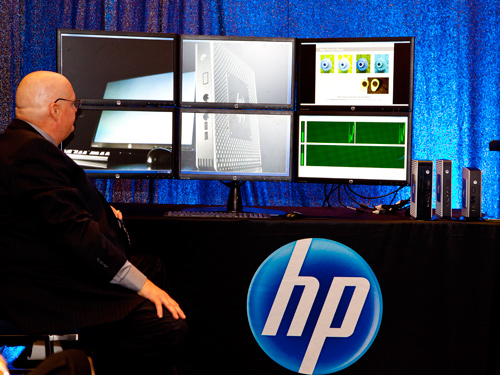 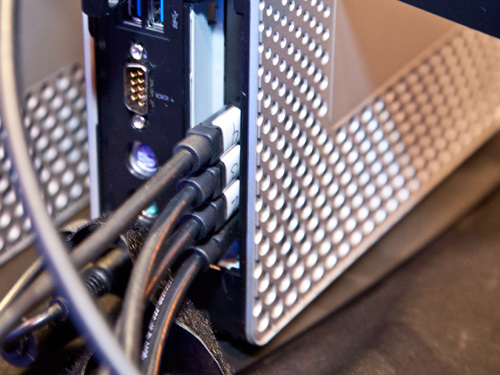 The HP t610 Flexible Series Thin Client also comes with new and improved built-in hardware security. It's the first thin client to come integrated with an encrypted firmware (BIOS) which prevents the system from being hijacked by hackers and it complies with the security recommendations of the National Institute of Standards and Technology (NIST). In addition to that, HP also integrated an on-board TPM (Trusted Platform Module) that protects access to networks under the certification requirements of the Trusted Computing Group.

For customers who don't require the graphics performance of AMD's Radeon GPUs, they can choose the new HP t510 Thin Client which is based on the VIA Eden X2 U4200 1GHz dual-core CPU, the highest performing processor in its class. Although clocked at the same speed as their previous models based on the VIA Nano U3500 processor, the newer VIA Eden X2 U4200 can still deliver up to 58% more performance. Through its built-in VIA ChromotionHD 2.0 graphics, the new t510 can deliver up to 50% more performance when playing WMV 1080p videos.

In keeping up with the demands of today's applications, these new thin clients will now ship with 2GB of RAM, doubled that of previous models. The new range of thin clients will be available in March in the Asia Pacific and Japan region, and in April in the Americas and Europe, the Middle East and Africa. The HP t510 Thin Client and the HP t610 Flexible Series Thin Client has a starting price of US$259 and US$399 respectively. If you compare the starting price of the HP t610 with the previous t57xx series (which happens to also start at the same price point), it does look like HP is now offering customers greater value and performance using an AMD part instead of Intel's costlier Atom. For the VIA-based t510 Thin Client, its starting price point is only US$10 more than the previous series. However, do note that pricing are dependent on the final configuration of the system.

Previous Story
Google-Motorola Deal Gets Go Ahead From U.S. and EU
Next Story
IDC Forecasts Growth in Southeast Asia's IT Services Market