We’ve previously reported that all four major local telcos, as well as Yes, will be offering their own pre-order plans for the Samsung Galaxy Note8. Details were scant then, but now that the pre-orders have started and are in full swing, we’ve compiled the details of the pre-order plans of each, in case you want to get Samsung’s new phablet from one of the telcos. Also, Save for Samsung’s own rebate of RM321, all other pre-order bonuses are identical. This means you’ll be getting the 5,100mAh power bank and the one-year extended warranty. It goes without saying that Maxis will be bundling the Galaxy Note8 together with its Zerolution plan. But of course, you will also have the option to purchase the device alongside a conventional plan. Whichever plan you choose, you will be tied down to a 24 month contract. You can learn more about Maxis' plans on it's pre-order page here. It’s much more straightforward to purchase a Galaxy Note8 with Celcom, however.

Digi is offering three of its postpaid plans as part of the Samsung Galaxy Note8 pre-order, the Postpaid 78, Postpaid 108 and Postpaid 138. The number in the name represents the cost of subscription each month, and if you sign up for any of them, you’re tied to the plan for 24 months.

With the Digi Postpaid 78 plan, Samsung Galaxy Note8 will be priced at RM2,868. That said, you’ll have to pay an additional RM520 up front that will be deducted from your monthly plan payment, as well as a month’s payment of RM78 in advance. All this brings the total cost of your initial payment up to RM3,466.

It’s much the same story with Postpaid 108, with the price of the Samsung Galaxy Note8 dropped to RM2,568, but the upfront payment required with this plan is RM820. Add in the one month’s advance of RM108 and the total comes to RM3,496.

Finally, the Postpaid 138 brings the price of the Samsung Galaxy Note8 down to RM2,268 but requires an advance payment of RM1,120, which is essentially the same as the upfront payment except Digi postpaid customers of a year or more can choose to waive this and pay their monthly bill in full. Add all these to the one month’s advance of RM138and you get a total of your initial cost to RM3,526.

Digi’s pre-order site is where you’ll need to go if you need more info on what they have to offer.

The plans offered by U Mobile are pretty similar as well. We have three plans – Ultimate Device 60, Ultimate Device 90 and Ultimate Device 130. The first needs an upfront payment of RM360, the second demands RM600 up front while the last requires you to fork out RM960 in advance. Again, you’re tied to the plan of your choice for 24 months. 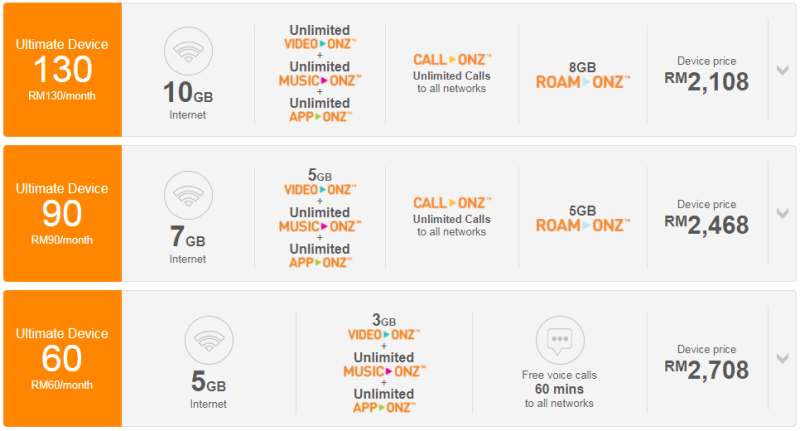 U Mobile has got its info pretty concise on its pre-order website, but you could always visit it yourself for more info.

Yes has two plans with very little difference between them in terms of what you’re paying up front. In fact, both the Postpaid 88 and Postpaid 128 plans will ask of you an initial sum of RM3,499. The individual breakdown for Postpaid 88 being the Samsung Galaxy Note8 being priced at RM2,699 and the postpaid device upfront payment being RM800, while Postpaid 128 has the price of the Galaxy Note8 at RM1,899 while the postpaid device upfront payment is pushed up to RM1,600.