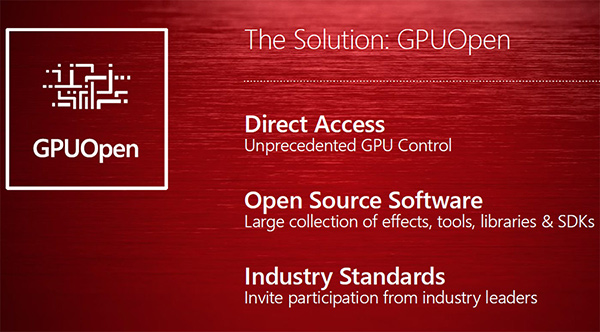 AMD last week began to flesh out its graphics strategy for 2016, which included updates like FreeSync over HDMI and plans to implement support for DisplayPort 1.3 and High Dynamic Range (HDR) displays. As it turns out, it also intends to take on NVIDIA on the software development side of things with GPUOpen, a new open source software initiative that will go up against NVIDIA GameWorks.

From the outset, there are already fundamental differences between the two. NVIDIA GameWorks is not in fact open source, even if developers can pay for code licenses under certain circumstances. NVIDIA’s approach has always been to champion its own proprietary middleware libraries that can be readily integrated into games, but have been optimized for GeForce graphics cards.

On the other hand, AMD has generally been more supportive of open source development by promoting accessibility and the advantages of collaboration.

Of course, NVIDIA’s approach isn’t ideal for the competition – namely, AMD – and for users who want to run GameWorks titles but don’t own an NVIDIA card. In the case of games that integrate GameWorks libraries, there is little AMD can do to optimize performance on its own hardware, short of creating their own custom libraries.

And that’s exactly what AMD has done now. GPUOpen and its libraries are licensed under the MIT open source license, which means that they are truly open source. GPUOpen will include things like visual effects, driver utilities, troubleshooting tools, libraries and SDKs, all of which will be open to developers to modify and share. 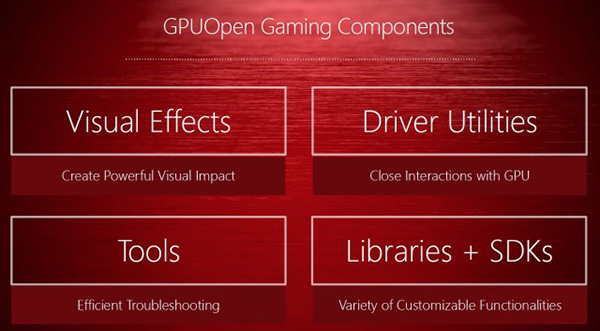 The implication is that AMD will benefit in the long-term from improvements made over time. GPUOpen will be hosted through an online portal with links to open source content, blog posts by AMD staff and guest writers, and industry writers. The linked code will all be accessible via GitHub to facilitate collaboration. The open source nature of the project also means that it will be practically impossible for AMD to skew game performance toward its own hardware.

GPUOpen will start rolling out in January 2016 with an initial set of libraries and capabilities like AOFX, Geometry FX, ShadowFX, and TressFX 3.0. Also included will be the LiquidVR SDK, DirectX 11 and 12 code samples, and other SDKs. 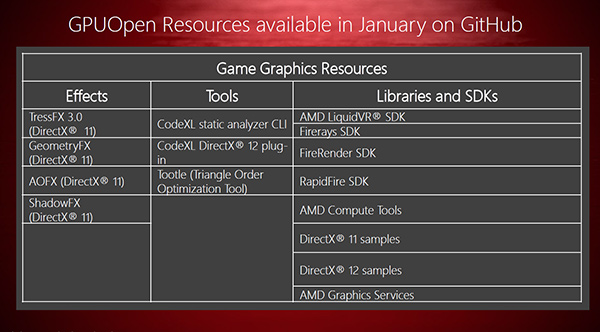 The thing with NVIDIA GameWorks is that it is usually part of an agreement between NVIDIA and the game publisher – for instance, NVIDIA might agree to buy and distribute a certain number of game copies with its cards if a publisher uses GameWorks.

As a result, it is impossible say how the lure of an open source development environment will weigh up against the “perks” NVIDIA is offering with GameWorks. Only time will tell if GPUOpen will manage to successfully challenge GameWorks.