Google+ Photos to shut down

Google+ Photos to shut down

With the launch of the standalone Google Photos site, it seems the Google+ version of Photos isn’t needed anymore, so Google has just announced that the service will be shut down, bringing its photo sharing services down from three to two – Google Photos and Picasa Web Albums.

Picasa will serve as a host for pictures shared during Google Hangouts, and notes have already gone out to Google Apps administrators to enable Picasa Web if they want to continue sharing photos over hangouts.

Not all of the photo functionality of Google+ is going away though. You’ll still be able to share photos to your stream and your existing pictures aren’t going away. You just won’t be able to access the mass photo storage and viewing features on Auto Backup. 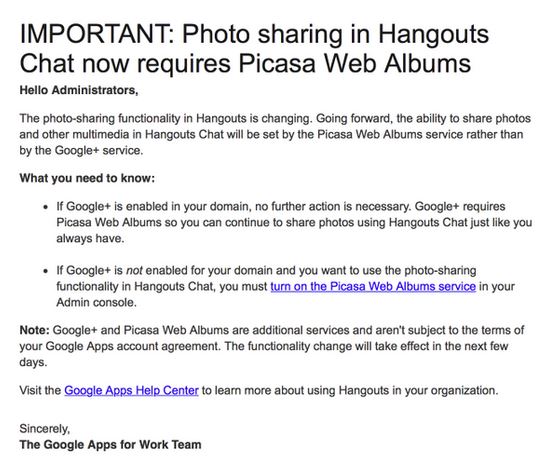 This is just the latest in Google’s purge of “plus” features from its ecosystem as several years of struggling to gain traction and the departure of the project leader seems to have led the search giant to gradually “trim” some of the services offered by shifting them to other standalone sites.

But that’s not necessarily a bad thing though. Google Photos gives you a lot of the photo sharing features of Google+ Photos without the Google+ social sharing part. There’s still a good amount of cloud storage, and Auto-Awesome (now known as “Assistant”) is still there, so you can get automated revamps, panoramas, and album slide shows from your uploaded pictures.

Google Photos will also automatically make collections of your most photographed people or subjects (like “food” or “pets” for example), making it easier to sift through your collection of images. Tapping on a person’s face will also search for other pictures of that person in your collection, giving you the advantage of using tagging via image recognition.

With the breakaway from the Google+ ecosystem, Google Photos now makes it easier for you to share your pictures on other social networks, so there’s now Facebook and Twitter integration alongside the ability to share to the Google+ network.