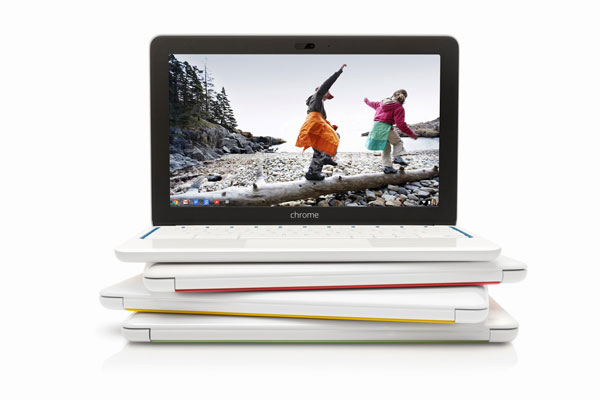 To keep the price of the machine low, an ARM processor (Samsung Exynos 5250) primarily used in tablets was used in the Chromebook 11. Casual browsing and browser games would be no problem for this processor, but anything more strenuous (like 20 opened tabs) would prevent an optimal experience with the Chromebook, which also only has 2GB of RAM.

A nice bonus that comes from this processor choice, is that you can expect the battery life of the Chromebook 11 to be pretty long lasting -- about six hours, according to Google. This also means the Chromebook 11 can afford to have a fanless design, due to the low power demands of its processor.

But of course, being cheap doesn't mean that the machine will look and feel cheap. The Chromebook 11 has an 11-inch display with a 1366 x 768 pixels resolution, which is pretty low when you consider what kinds of resolutions that tablets pack.

However, it's made with IPS technology, which means it's bright, and clear, even when you're viewing it from extreme angles. This means you don't have to sit squarely in the center to enjoy whatever is being displayed.

And even though the 1.03kg HP Chromebook 11 is made entirely from plastic, it has a magnesium alloy frame that gives it a rigidity that prevents the machine from bending or flexing, even if you hold it from the corners. This shows that the Chromebook can take a fair bit of abuse, and is quite suitable for children to use.

As with other Chromebooks, the Chromebook 11 will be come with 100GB of Google Drive cloud storage, but unfortunately it will only be free for the first two years, after which, a subscription fee has to be paid in order to retain it.

When Google revealed the new HP Chromebook, only the 11-inch version was mentioned. However, if you went into the HP Chromebook page, you will see that there's also a new 14-inch version, which runs a fourth generation Intel Celeron (2995U) processor.

This larger Chromebook will also come in three different colors, and has a 32GB SSD instead of an 16GB eMMC drive that comes with the Chromebook 11. In our experience, SSDs typically have less issues with multitasking than eMMC (for example, it tends to slow down if you're downloading something) has.

There has not been any announcements regarding the HP Chromebooks' availability in Malaysia, but Chromebooks are officially available in Malaysia now, so it's highly possible that HP will make them available here. We'll update this space once we hear more from HP.