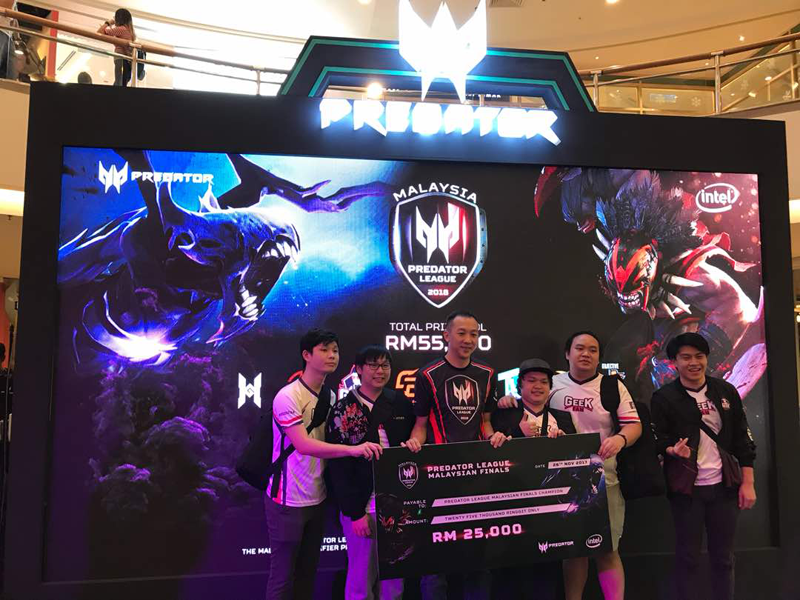 The grand finals of the Asia Pacific Predator League Malaysian qualifiers was streamed live over Twitch and Acer Malaysia’s official Facebook page over the past weekend. After battling it out against finalist Fire Dragoon for five continuous hours, team Geek Fam managed to emerge from the battlefield as champions.

“The game was fun and interesting, and this Malaysia Final was intense. The win was particularly sweet for Geek Fam as we are a new team, formed just six weeks ago. It was a good game and the machines were good; there was no delay or lag, giving us a smooth play,” said Lim Keat Kuang aka ‘Sheep’, the owner of Geek Fam.

In case you were wondering, the ‘machines’ in question were none other than Acer Predator Helios 300 gaming notebooks, which are equipped with an Intel Core i7-7700HQ processor, an overclockable NVIDIA GeForce GTX 1060 GPU, and 8GB of DDR4 RAM.

For their effort, Geek Fam will be taking home RM25,000 in cash, and will represent Malaysia in the Asia Pacific Predator League grand finals, which will be held in January 2018 in Indonesia. There, Geek Fam will be going up against the champions from six other nations – Indonesia, Singapore, Philippines, Thailand India and Hong Kong – for the opportunity to bring home a share of the US$150,000 (approx. RM617,100) prize pool.