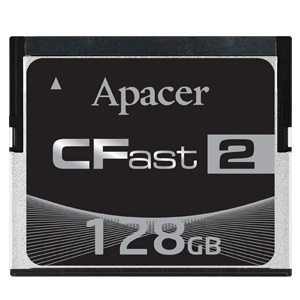 Apacer has announced that it is the first manufacturer to release CompactFlash cards that have the SATA 6Gb/s interface and conform to the CFast 2.0 standard. The new CFast 2.0 cards allow fpr sequential read and write speeds of 310MB/s and 240MB/s respectively. In addition to featuring a 2-channel bidirectional structure, the CFast 2.0 has Toggle DDR 2.0 NAND Flash technology as well, which serves to increase performance.

Known as the CFast 2-M series, these cards are available in a variety of capacities, from 16GB to 128GB. Local pricing and availability is yet to be confirmed.